Is Archbishop Dolan the new Sheen? 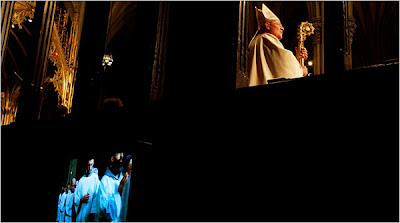 The New York Times is an odd place to find this comparison, but it is a good one! The paper compares the new Archbishop of New York to the Venerable Archbishop Fulton Sheen! Here is an excerpt from the Times:

In his first homily as the new leader of New York’s Roman Catholics, Archbishop Timothy M. Dolan managed Wednesday to tuck in a single but telling mention of a church leader who is one of his personal heroes.

That figure is Archbishop Fulton J. Sheen, who is buried in the crypt below St. Patrick’s Cathedral.

Archbishop Sheen, who once headed the Diocese of Rochester and was an auxiliary bishop in New York, never ascended to the heights of the church’s hierarchy as Archbishop Dolan now has. But because of his popular, pioneering radio and television broadcasts, Archbishop Sheen was the public face of Catholicism for many Americans from the 1930s through the ’60s, projecting the church’s message on everything from politics to prayer.

Archbishop Dolan, a church historian whose studies have focused on the contemporary American Catholic experience, made it clear on Wednesday that he understands he was chosen for his formidable skills at communications and public relations, and that he intends to use them.

A bear of a man with a round, open face and ready smile, he has already hugged countless New York priests, parishioners, seminarians and staff at church headquarters, who seem to light up at his warm attention. He swept into a morning news conference with his hand outstretched, stopping to shake reporters’ hands and make connections, as if working a cocktail party.

Before taking questions, he thanked the journalists — a disarming move that immediately set a tone different from that of his predecessor, Cardinal Edward M. Egan, who often had a prickly relationship with the news media.

Before he arrived in New York this week from Milwaukee, where he headed the archdiocese for seven years, he was the host of a weekly television program; his brother, Bob, is a former radio talk show host. Archbishop Dolan told Milwaukee’s archdiocesan paper, The Catholic Herald, that he would welcome an invitation to appear on “The Late Show With David Letterman.” Maybe, he mused, people would remember not just his jokes, but also a bit of catechism.

Tom Keaney, a spokesman for the show, said, “We’re honored to be on the archbishop’s radar screen.”

Peter V. Handal, president and chief executive of Dale Carnegie & Associates, the communications curriculum used by generations of business and civic leaders, said Wednesday from his aisle seat as he awaited the procession into St. Patrick’s that he had seen Archbishop Dolan only on television so far, but was impressed with his capacity to project himself.

Hat tip to the Deacon's Bench for this one!
Posted by Padre Steve at 8:17 AM

He is suppose to be on in 11 minutes:http://www.sirius.com/catholicchannel
Every Thursday at 1:00 PM