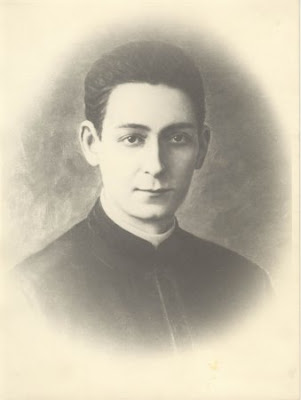 August Czartoryski, a Prince of the Polish Czartoryski family, was born in Paris during the family's exile. August was a sickly child and he spent much of his youth being shuttled to various places for his health. He was accompanied and tutored by a Polish patriot, Father Raphael Kalinowski, a man who was later canonized.

It was Prince Ladislaus's desire that his son August pursue a diplomatic career, but the young prince felt a different calling. He was encouraged by Pope Leo XIII to follow Don Bosco (later Saint John Bosco) of the Salesians.

In 1887, after meeting Don Bosco, August joined that order in Turin, with the ailing Bosco's blessing. He studied theology and philosophy but his health continued to decline. On April 2, 1892 he was ordained as a priest by the Bishop of Ventimiglia, though his family discouraged this, and refused to attend the ceremony. He died only a year later, on April 8, 1893, in Alassio, Italy, of tuberculosis, at the age of 34.

"How lovely is your dwelling, O Lord of hosts! My soul yearns and pines for the courts of the Lord. ... Better one day in your courts than a thousand elsewhere" (Psalms 84:2,11). Blessed Augustus Czartoryski had these words of the Psalm written as his motto of life on the memento of his first Mass. In them are reflected the rapture of a man who, following the voice of the call, discovers the beauty of the priestly ministry.

In them resounds the echo of the different choices that must be made by anyone who perceives the will of God and wishes to fulfill it. Augustus Czartoryski, a young prince, elaborated an effective method of discerning divine signs. He presented to God in prayer all his questions and underlying doubts and then, in the spirit of obedience, followed the advice of his spiritual guides. Thus he understood his vocation to undertake a life of poverty to serve the littlest ones. The same method enabled him, throughout his whole life, to make such decisions so that today we can say that he fulfilled the designs of Divine Providence in a heroic way.

I wish to propose his example of holiness above all to young people, who today seek to discern the will of God in regard to their lives and wish to proceed faithfully every day according to the divine word. My dear young friends, learn from Blessed Augustus to ardently request in prayer the light of the Holy Spirit and wise guides, so that you will be able to know the divine plan for your lives and be capable of walking always on the path of holiness.

To learn more about this wonderful Salesian Blessed please click here.
Posted by Padre Steve at 12:22 AM