Pope Benedict: Proper formation is crucial to renewing the priesthood 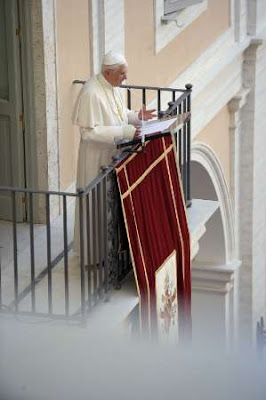 At today's general audience, Pope Benedict XVI looked at the life of St. John Eudes and the importance of ongoing formation of the clergy. Pope Benedict urged the faithful to pray for priests and candidates to the priesthood, saying that their proper formation is crucial for the renewal of the priesthood.

Benedict XVI presented St. John Eudes, whose feast day is remembered in the liturgical calendar on August 19, in the historical context in which he lived, that of the seventeenth century, a century marked by spiritual personalities of the caliber of St Vincent de Paul and St. Louis Mary Grignon de Montfort.

The Pope mentioned that St. John Eudes and the Curé d'Ars, patron of the Year for Priests, were canonized on the same day, May 31, 1925, by Pius XI, "offering to the Church and the world two extraordinary examples of priestly holiness.”

St. John Eudes ministry took place within the context of the teachings of the Council of Trent in 1563, the Pope explained.

That council “set out rules for the establishment of diocesan seminaries and the formation of priests. The Vatican was well aware that the entire crisis of the Reformation was conditioned by insufficient formation of priests, who were not prepared for the priesthood in the right way, intellectually or spiritually, in the heart or in spirit,” Benedict recalled.

The application and implementation of standards, the Pontiff explained, was slow in both Germany and France and so, St. John Eudes, who was a parish priest, founded a congregation specifically dedicated to the formation of priests. “The path of holiness, which was his path and which he proposed his disciples, had a solid foundation in trust in the love that God revealed to humanity in the priestly heart of Christ, and the maternal heart of Mary,” the Pope added.

The Holy Father recommended a particular saying of St. John Eudes to the faithful to help them grow in holiness: "Give yourselves to Jesus, to enter into the immensity of his great Heart, which also contains the Heart of his Holy Mother and all the saints, and loose yourselves in this abyss of love, charity, mercy, humility, purity, patience, submission and holiness.”

Turning his attention to modern efforts to improve the formation of priests, Pope Benedict noted Pope John Paul II's Apostolic Exhortation “Pastores Dabo Vobis,” which was issued after the 1990 Synod.

John Paul II's Exhortation “incorporates and updates the rules of the Council of Trent and particularly emphasizes the necessary continuity between the initial and ongoing formation,” Pope Benedict explained. “The foundation laid in the spiritual life is that irreplaceable 'spiritual school' in which we ‘learn Christ ' and allow ourselves to be progressively conformed to Him, the one and only High Priest and Good Shepherd.”

During this Year for Priests, Benedict XVI concluded, let priests and seminarians, inspired by the day’s saint, spiritually “enter into the heart of Jesus,” becoming men of true love, mercy, humility and patience, renewed in holiness and pastoral zeal.

After his address, Pope Benedict sang the Our Father in Latin with the faithful gathered for the audience.

For more on this please click here.
Posted by Padre Steve at 8:41 AM