Film being planned on Guadalupe 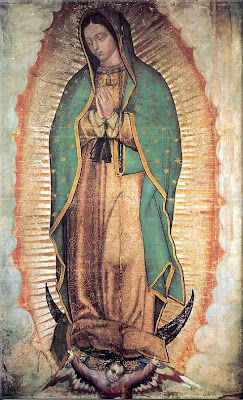 I pray this film touches millions of hearts! The following comes from Reuters:

He may have sanded his jagged edge, but Joe Eszterhas still, apparently, has the basic instinct.

The polarizing scribe, who hasn't had a film released theatrically in the U.S. in more than a decade, has signed on to a project about the mystical sighting of a virgin in 16th century Mexico.

Eszterhas will write the screenplay about the virgin of Guadalupe, a vision that appeared to the Aztec peasant Juan Diego in 1531. While some scholars question Diego's existence, the event is credited with helping to spread Catholicism at a time of economic and social turmoil in the country. Earlier this decade, Diego was canonized as a saint by the Roman Catholic church.

Eszterhas, sounding like someone other than the man who gave the world hard-R potboilers like "Basic Instinct" and "Showgirls," noted that the Guadalupe project was a "labor of love" and that he had been "hoping for some time to write a film that is both entertaining and inspiring."

The untitled project will be produced by Mpower Pictures, the spirituality-minded banner founded by former Mel Gibson producing partner Steve McEveety. The banner also is behind recent Iranian drama "The Stoning of Soraya M."

Eszterhas has had a roller-coaster life in Hollywood; he is one of its most influential screenwriters and one of its most infamous characters. The Hungarian-born writer has penned some of the town's most successful movies of the past several decades ("Jagged Edge," "Flashdance," "Basic Instinct") and some of its highest-profile flops ("Showgirls," "An Alan Smithee Film: Burn Hollywood Burn.") With the autobiographical tell-all "Hollywood Animal" and a number of other books, he pulled back the veil on the sometimes sordid nature of making movies and detailed his own colorful exploits.

After several freewheeling decades in southern California, he and his family moved eight years ago to suburban Cleveland, with 1997's "Smithee," his poison-pen letter to the studio system, his last produced work.

But Eszterhas soon received a diagnosis of throat cancer, and the writer gave up the hard living that had been his calling card, finding, he said, spirituality and Christianity.

Eszterhas penned only one film in his Ohio existence, 2006's "Children of Glory," which told of a politically sensitive 1956 Olympics water polo matchup between Russia and Hungary that turned bloody. The picture did not receive a U.S. theatrical release.

There is not yet a director or green light on the Guadalupe project. But McEveety said that the significance of the event was enough to merit a big-screen treatment. "Guadalupe changed the course of history for the indigenous peoples of Mexico," he said. "It had a transformative effect on their culture and especially their faith."

Hat tip to Spirit Daily for this one!
Posted by Padre Steve at 1:45 PM

Looking forward to see it...