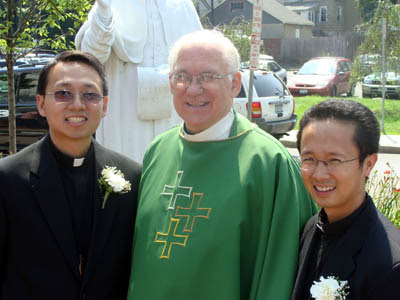 This past Sunday my province of Salesians in the Eastern US was blessed by two first professions! Br. Mihh and Br. Paul will be wonderful blessings to the many young people they will minister to as Salesians of Don Bosco. Here is the write up from the Salesian News Agency:

When Bros. Minh Duc Dang and Paul Phuoc Trong Chu professed their vows into the hands of Fr. Thomas Dunne, SUE Provincial, at Holy Rosary Church in Port Chester on August 16, God’s smile went back at least as far as Deuteronomy 28:25. It seems he still likes to make use of the Diaspora.

Minh and Paul both came to the U.S. with their families in 1992. They both came from Ho Nai in Bien Hoa Province, Vietnam, but neither had met before they entered the Salesian formation program in the U.S.

The Salesian Province of Vietnam has been outstanding in recent years for the number and quality of its missionaries now to be found in all parts of the globe. Maybe God is rewarding this generosity in other ways too. Both U.S. Salesian provinces (SUO and SUE) have young men who have come to the Salesians not by missionary mandate, but because they have grown up there and been attracted to Salesian community and work. The same can be said also or the Australia-Pacific Province.

In Minh’s case, his vocation was given a helping hand by a brief visit back to Vietnam, which included catching up with an uncle, a Salesian priest there. He wasted no time contacting the Salesian vocation office in South Orange, N.J., on return to the U.S.

Paul was already moved to serve the Lord, first as an altar server, which had to wait until he came to the U.S. Active, then, in the Vietnamese Eucharistic Youth Society with St Dominic Savio as its patron, he was gently led to the Salesians. Fr. Dunne recognized God’s ‘pursuit’ of the two young men in these fascinating stories of their vocation, now reaching the point of their first religious profession.
Posted by Padre Steve at 8:40 AM