Abortion must be left out of heath care reform, Carl Anderson stresses 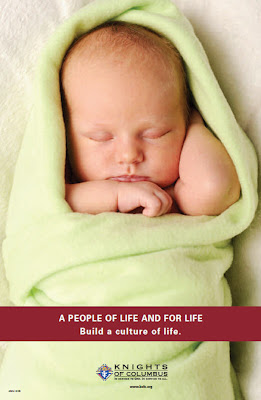 The leader of the Knights of Columbus calls for the removal of abortion an euthanasia from any new national health care plan. Let's pray that some of our leaders are listening. Here is the story from CNA:

While presenting the Knight’s annual report on Tuesday, Supreme Knight Carl Anderson insisted that health care reform measures must not “become a vehicle for taking lives through abortion and euthanasia.”

The Supreme Knight noted that by including an abortion mandate, the government is going against the majority of Americans who favor restrictions on abortion.

“If people were allowed to choose; 86% of the American people would choose to significantly restrict abortion,” Anderson said citing a Knights of Columbus poll. A Gallup poll conducted from May 7 to May 10 reported that 51 percent of Americans now call themselves "pro-life," while only 42 percent call themselves "pro-choice." Self-described pro-lifers had never made up a majority of survey respondents since Gallup started asking the question in 1995.

“A health care system designed to save lives on the one hand must not become a vehicle for taking lives through abortion and euthanasia,” Anderson said.

He also discussed the Knight’s ultrasound initiative, which assists in purchasing ultrasound equipment for pregnancy clinics.

“The Ultrasound Project saves lives. Up to 90% of women considering abortion choose to have their babies after seeing an Ultrasound image. They hear their baby’s heartbeat; they see their baby’s head and fingers. They know that their baby is a child, not a choice,” the Supreme Knight explained.

He continued, “And here’s the best part: you can’t change that decision for life by an executive order. It can’t be reversed by a court decision. Once the baby is born, mother and her baby have won. The Culture of Life has won. All of us have won.”