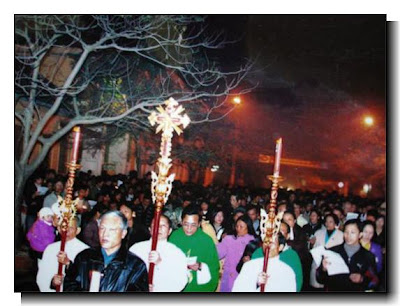 The Bishop's office of Vinh is demanding that the government in Vietnam stop harassing the Catholic Church and bring back law and order for the people. The following comes from the VietCatholic site:

In the statement released on July 31, Catholics in Vinh Diocese denounced “the ongoing distortion of truth, the defamation of religion, and the promotion of hatred between Catholics and non-Catholics by means of state media to spread negative image of Catholic victims, accusing them of “reacting outrageously by the news of assaults against their priests.". It's only one of the tactics the state media has been successfully applying to discredit and to smear the good image of Vinh faithful.

“Fr. Peter Nguyen The Binh, who had escaped death after being beaten savagely by a group of pro-government thugs, told visitors from parishes [of the diocese of Vinh] how he had been brutally attacked by the gang under indifferent eyes of police officers in uniform. Outrage has spread quickly among Catholics throughout the diocese,” the statement said.

To avoid further tensions and the risk that the situation may spin out of control, the diocese of Vinh urges the local government of Dong Hoi city to be self-constraint and behave within the boundary of the laws. Also, the diocese of Vinh demands the return of the properties of the Church and individual Catholics. “It helps to ease the tensions,” the statement suggested.

Also, Fr. Anthony Pham Dinh Phung, the chief secretary of Vinh Diocese accused police in Dong Hoi of the confiscation of money of those (Catholics) in custody without any inventory reports. “Their money and other properties must be returned to them,” he added.

On Friday, the Nhan Dan newspaper - the mouthpiece of the communist Party - published statements in which it stated that arrested Catholics "have confessed their sins and begged to be pardoned”.

However, having been released some of them quickly fled the city accusing police of Dong Hoi of beating them cruelly during the incident at Tam Toa on July 20, and on the way to a police station where they were coerced to sign statements against their will.

Fr. Anthony Pham Dinh Phung, speaking on behalf of the diocese, demanded the immediate release of other Catholics who are still behind bars. “The Church had tried its best to calm down its faithful,” he said. "However, the government must take responsibility should the persecution keep going,” he warned.

Catholic sources in Dong Hoi have revealed that local government has instigated the hatred against Catholics among non-Catholics who are living nearby the church of Tam Toa by lying to them that the Church has demanded not only the ground of the Church but also all land lots of land around, including those on which they built their houses. Such negative rumors surely created a bad image for those Catholics who have suffered enough at the hands of those government officials whom they should turn to for help and protection, not to be careful of and to be fearful of.
Posted by Padre Steve at 1:53 PM