The Prayer of the Who Dats 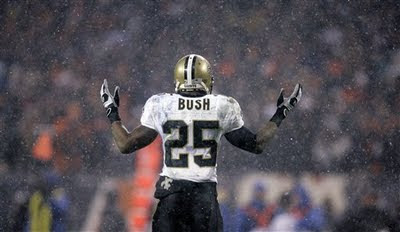 As my Saints begin the second season of the playoffs today I thought it would be good to share this prayer once again! This is a great story from nola.com:
The Rev. R. Tony Ricard has always loved the Saints.

The Catholic chaplain for the New Orleans Saints has fond memories of going to Tulane Stadium as a young boy with his dad to watch the team play. And as a teenager, he recalls standing on the field of the Superdome at halftime performing with the St. Augustine High School Band.

His only bad memory is of the "bagheads" who donned paper sacks in the early 1980s, during one of many eras when the team was struggling.

"I was so angry at the people who did that," he says. "I couldn't imagine putting a bag over your head and hiding your face."

Ricard, called "Father Tony" by his parishioners at Our Lady Star of the Sea Church on St. Roch Avenue, loves to preach, but on game days he has been known to cut short his homily at the 10 a.m. gospel Mass.

When his rectory was flooded after Hurricane Katrina, Ricard made the best of a bad situation. He included "The Reggie Room" in his renovations.

It's the perfect place for him to watch away games. A Fathead of Reggie Bush graces one wall, and the whole room carries out the Saints theme.

One of his favorite decorations is a framed photograph of the Saints' first appearance in the Superdome after the storm.

Fans will never forget that Monday Night Football game: It was on Sept. 25, 2006, against the Atlanta Falcons. Both teams were 2-0 for the season.

"I was there," Ricard says. "It was one of the most electrifying, exciting moments I've ever experienced. The energy from just waiting for the doors to open. Walking in and realizing it was the first major event. I don't think we sat down the entire game."

When it ended, the score was Saints 23, Falcons 3.

"It wasn't just a game," Ricard says. "It was a sign to the world that New Orleans was coming back and coming back strong."

Like all faithful fans, Ricard believes this is the year.

In recognition of the day we've all been waiting for, he has written a prayer for the New Orleans Saints.

Lord God of All Victories,
With joy in our hearts and victory on our minds, we come to you, asking that you shower your blessings upon our beloved New Orleans Saints as we begin this new season of football.

Through your love, Lord, continue blessing Mr. and Mrs. Tom Benson and Ms. Rita Benson LeBlanc. Please reward them abundantly for working so hard to keep our Saints here at home in the Louisiana Superdome.

With your permission, we call on the prayers of the saints in heaven to bless and protect our Saints on Earth.

Through the intercession of St. Simon Peter, the first pope, may coach Sean Payton and all our coaches create game plans that lead and guide our players to victory.

Through the intercession of St. Michael the Archangel, guardian of heaven, may Jammal Brown, Jahri Evans and the entire offensive line continue to protect Drew Brees and our quarterbacks.

Through the intercession of St. Anthony of Padua, patron of lost articles, may Reggie Bush, Lance Moore, Pierre Thomas, Marques Colston and their friends continue to find the end zone.

Through the intercession of St. Joseph the Worker, patron of hard laborers, may Jonathan Vilma, Will Smith and all of our defensive players work diligently to defend our goal line and prevent our opponents from venturing too deep into Saintly territories.

Through the intercession of St. Joseph of Cupertino, patron of flight, may the kicks from John Carney fly through the uprights and the punts by Thomas Morestead fly high in the sky. Also, may our return men fly past our opponents and straight into the end zones!

Lord, through the intercession of St. Luke, the doctor, may all of our players remain healthy so that they can continue to use their God-given gifts to entertain our minds and uplift our spirits.

Thank you, Lord, that we no longer have to call on the intercession of St. Jude. At last, our team is no longer considered a hopeless case!

Through the intercession of the true Saints of New Orleans, St. Francis Cabrini, St. Katherine Drexel, Blessed Francis Seelos and Servants of God -- Mother Henriette Delille and John Paul II, may the New Orleans Saints bring to the football field the same vigor and energy that these saints brought to the streets of New Orleans.

May all of the Saints, both in heaven and here on Earth, continue to bring joy to our hearts until we are united with all the saints of God in the kingdom of heaven where the final victory has already been won.

Prayers had never failed to submit us in victory.....Just believe in God and believe on what he can do for all of you...Do our best and God will do the rest...
Godspeed...