Pope at Rome synagogue: ‘May these wounds be healed forever!’ 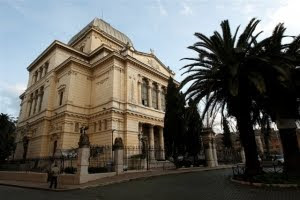 Visiting the Rome synagogue this afternoon, Pope Benedict strongly reaffirmed the church’s commitment to dialogue with the Jews and its modern teachings against anti-Semitism.

He also recalled the church’s request for forgiveness for the failings of Christians and for all they may have done to contribute to “the scourge of anti-Semitism and anti-Judaism.”

“May these wounds be healed forever!” the pope said to applause in the packed synagogue.

Without mentioning Pope Pius XII by name, Pope Benedict responded gently to criticism of the wartime pope, saying that “the Apostolic See itself provided assistance, often in a hidden and discreet way” to Jews in Rome who sought to escape Nazi persecution.

A few minutes earlier, in a welcoming talk, Riccardo Pacifici, president of Rome’s Jewish community, said the “silence” of Pope Pius was still painful for the Jewish community. Catholic historians have said the late pope worked quietly but effectively to help Jews, and Pope Benedict recently advanced his beatification cause.

The pope recalled the common religious heritage of Christians and Jews, in particular the Ten Commandments, the Decalogue, which he said remains “a beacon and a norm of life in justice and love, a ‘great ethical code’ for all humanity.”

He declared it was the duty of today’s Christians and Jews to “keep open the space for dialogue, for reciprocal respect, for growth in friendship, for a common witness in the face of the challenges of our time.”