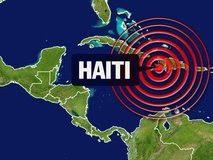 Please continue to pray for the people of Haiti. Here is the latest from the Salesian News Agency:

In spite of the difficulties in communicating with Haiti we have heard that among the victims of the earthquake which struck the Caribbean island of Haiti yesterday there is the Salesian Brother Hubert Sanon 85 years of age.

At present among those missing is a Salesian priest aged 38, Fr Harold Bernard, buried under the ruins; there is no further news of him. The two Salesians were at work when at 16.53 local time, a few kilometres from Port-au-Prince there was a scale 7 earthquake.

As yet there is no news whether or not among the victims there are youngsters or other Salesians from “Saint John Bosco” in Port-au-Prince-Enam, where Br. Sanon and Fr Bernard were living. Here the Salesians have a primary school, a technical school and also a reception centre for youngsters in difficulty and an oratory.

“We have been hit very hard,” says Fr Ducange Sylvain, appointed the new Superior of the “Blessed Philip Rinaldi” Vice Province of Haiti last December, referring to the situation of the Salesians.

In a short and dramatic communication Fr Sylvain gives a picture of the situation a few hours after the earthquake measuring 7.0 on the scale, which struck Haiti yesterday afternoon local time.

The house of Port-Au-Prince Enam and the foundations nearby the “Saint John Bosco” Institute such as the Work of the Little Schools of Father Bonhem, entrusted to the Salesians, and the “Lakay”, suffered the greatest damage in the city. The Salesians from the centre are injured. Brother Sanon died under the ruins and sadly over 200 pupils are still buried there.

The Provincial House and that of Fleuriot, both in Port-Au-Prince, have been severely damaged; two young Salesians in formation who were at the university are still missing.

At the house of Carrefour-Thorland a part of the building and the reception centre collapsed but the Salesians are safe. At Gressier class-rooms collapsed.

Fr Harold Bernard has been rescued from the ruins alive.

“It is a very difficult situation,” Fr Ducange Sylvain concludes. The emergency rescue services and the Salesians themselves are concentrating on trying to pull survivors from the rubble, in particular the more than 200 pupils at Port-Au-Prince Enam.

Archbishop Joseph Serge Miot, the archbishop of Port-Au-Prince, died under the rubble.

We need to pray for the poor people of Haiti who have endured their strongest earthquake in 200 years. Here is the story from the AP:

The strongest earthquake in more than 200 years rocked Haiti on Tuesday, collapsing a hospital where people screamed for help and heavily damaging the National Palace, U.N. peacekeeper headquarters and other buildings. U.S. officials reported bodies in the streets and an aid official described "total disaster and chaos."

United Nations officials said a large number of U.N. personnel were unaccounted for.

Communications were widely disrupted, making it impossible to get a full picture of damage as powerful aftershocks shook a desperately poor country where many buildings are flimsy. Electricity was out in some places.

Karel Zelenka, a Catholic Relief Services representative in Port-au-Prince, told U.S. colleagues before phone service failed that "there must be thousands of people dead," according to a spokeswoman for the aid group, Sara Fajardo.

"He reported that it was just total disaster and chaos, that there were clouds of dust surrounding Port-au-Prince," Fajardo said from the group's offices in Maryland.

AP has some pictures here.

father creator of universe in your son jesus name we pray. we hold these people up to u in prayer from haitti aaking mercy and help. may many countries respond in kindness to help these people today. thank you abba father