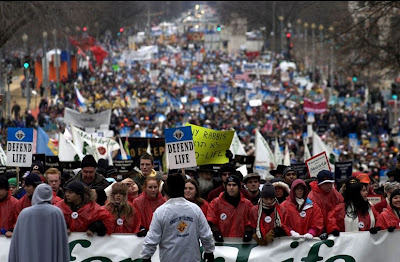 Young people are becoming more Pro-Life. That is no surprise to anyone who takes part in the March for Life. There were thousands and thousands of young people there yesterday! The following comes from the CNA:

Just one day before the March for Life in Washington D.C. and the anniversary of Roe v. Wade, a new survey shows that the number of Americans who say they are pro-life is continuing to grow. Members of the Millennial generation say abortion is “morally wrong” at a rate of 58 percent.

The survey, which was conducted between December 2009 and January 2010, was co-sponsored by the Knights of Columbus and the Marists. It asked, among other things, if abortion was “morally wrong.”

Fifty-six percent of Americans said they thought that abortion was indeed “morally wrong.”

The survey shows that Americans are becoming more pro-life, but more importantly, it showed that the upcoming generations are more pro-life than those nearing retirement.

The “Millennials,” as the generation of 18-29 year-olds is called, responded that abortion is morally wrong at a rate of 58 percent. Sixty percent of those belonging to “Generation X,” or people between 30 and 44, also fell in the pro-life camp.

“Americans of all ages – and younger people in even greater numbers than their parents – see abortion as something morally wrong,” said Supreme Knight Carl Anderson.

“America has turned a corner and is embracing life – and in doing so is embracing a future they – and all of us – can be proud of,” Anderson commented.

“Baby Boomers,” or people between the ages of 45 and 64, are less likely to call abortion morally reprehensible, with 51% saying abortion is wrong.

Those over age 65 said abortion is immoral at a rate of 60 percent.

“Advances in technology, show clearly – and ever more clearly – that an unborn child is completely a human being,” Anderson pointed out. “The majority of Americans now understand that abortion has consequences, and that those consequences are not good.”
Posted by Padre Steve at 9:02 AM