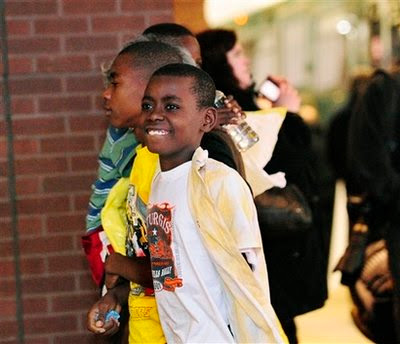 Jean Peterson Estime was outside playing soccer when his home pancaked in last week's earthquake and killed his parents and five sisters.

Now he sleeps with thousands in a Port-au-Prince park and forages in rubble for food and goods he can sell to survive.

"I'm trying to get a little job so I can take care of myself," he says, attempting to look brave even as he shuffles his dirty feet in too-big sandals.

What the 13-year-old really wants is someone to take him in.

Tens of thousands of children have been orphaned by the magnitude-7.0 quake, aid groups say — so many that officials won't venture a number. With buildings destroyed and growing chaos in the capital, they say many children are like Jean — living alone on the streets.

"Without doubt, most of them are in the open," said Elizabeth Rodgers, of the Britain-based international orphan group SOS Children.

Some may have family, but they've been abandoned or left unconscious at triage centers for care.

One 5-month-old patient at the Israeli field hospital has a number rather than a name.

No one even knows who left him at the makeshift medical center after he was pulled from a collapsed building four days after the quake. Doctors have a difficult decision as he recovers.

"What will we do with him when we are finished?" said Dr. Assa Amit of the hospital's pediatric emergency department.

Even before Tuesday's deadly magnitude-7.0 earthquake, Haiti, one of the world's poorest countries, was awash in orphans, with 380,000 children living in orphanages or group homes, the United Nations Children's Fund reported on its Web site.

Some children lost their parents in previous disasters, including deadly tropical storms and hurricanes that hit in 2004, 2005 and 2008, plus massive floods almost every other year since 2000. Others were abandoned amid the Caribbean nation's long-running political strife, which has led thousands to seek asylum in the U.S. — without their children — or by parents who were simply too poor to care for them.

International advocacy groups are trying to help, either by speeding up adoptions that were already in progress, or by sending in relief personnel to evacuate thousands of orphans to the U.S. and other countries.

The U.S. Department of Homeland Security on Tuesday announced a humanitarian parole policy that allows orphaned Haitian children into the U.S. temporarily on a case-by-case basis, so they can receive the care they need.

Spokesman Sean Smith said orphans who have ties to the U.S. — such as a family member already living here — are among those who can get special permission to remain in the United States.

More than 50 children, most of whom already have adoptive families waiting for them, arrived in Pittsburgh, Pennsylvania, Tuesday. After receiving initial medical treatment, they were taken to a "comfort center" with food, drink and toys, where they will stay until they are placed with foster families.

About 100 other children from the same orphanage, which was destroyed in the quake, are being cared for by Dutch and French agencies.

A charter plane is heading to Haiti to pick up 109 children being adopted by Dutch families and will reach Port-au-Prince on Wednesday, according to the Dutch government.

Indiana-based Kids Alive International, which runs orphanages around the world, is expected to take 50 Haitian orphans to group homes in the Dominican Republic, the organization said in a news release.

Notwithstanding the U.S. policy, the Catholic Church in Miami is working on a proposal that would allow thousands of orphaned children to come permanently to America. A similar effort launched in 1960, known as Operation Pedro Pan, brought about 14,000 unaccompanied children from Cuba to the U.S.

Under the new plan, dubbed "Pierre Pan," Haitian orphans would first be placed in group homes and then paired with foster parents, said Mary Ross Agosta, spokeswoman for the Archdiocese of Miami.

Meanwhile, U.N. humanitarian chief John Holmes said the United Nations is establishing a group on the ground in Haiti to protect children — orphans and non-orphans alike — against trafficking, kidnapping and sex abuse.

Orphanages that were operating in Haiti before the earthquake are scrambling to keep their kids safe, sheltered and fed.

Three of the four orphanages operated in Port-au-Prince by Planting Peace, a Melbourne, Fla., nonprofit, have been damaged, forcing staff to move everyone into one building. They are now trying to secure homes in Haiti for the kids, the group's founder, Aaron Jackson, told The Associated Press in an e-mail. Rainn Wilson, who appears in the TV show "The Office," is raising money for the group, Jackson said.

All 37 of his orphans are physically fine, Jackson said, and he would like to help more children.

"There needs to be some communication from the government level about what we need to do. Can we take these children?" he said. "We're ready. We've already raised a fair amount of money where we can go out and get an orphanage running soon."

Sherrie Fausey had to evacuate 30 children from her Christian Light Foundation orphanage in the capital after her facility was badly damaged in the quake.

Fausey, a former Florida elementary school teacher who came to Haiti 10 years ago, acknowledges that her job — daunting before the quake — has become even more challenging now.

"Wherever the Lord sends you, he'll make you content to be there," she said. "Times can be hard, but I'd rather be here in all this rubble. It's where my kids are."

Jean, a charming boy who kisses the extended hand of a foreign woman instead of shaking it, has found work so far loading food from a warehouse to trucks. The warehouse owner has given him something to eat.

He's only had a few years of school. He dropped out when his family could no longer afford it, and he can't read or write much. But he'd like a family who could feed him and let him return to school.

At the Israeli field hospital, patient No. 236, a 6-month-old boy, lies on a hospital stretcher, crying in pain. Relatives brought him to the medical center shortly after the disaster, then left. They didn't leave his name. His parents are dead.

Doctors suspect the infant had meningitis long before the earthquake. They also suspect that no one is coming back for him.

"We will wait to discharge him until there is a facility that can grant continuous care," Amit said.