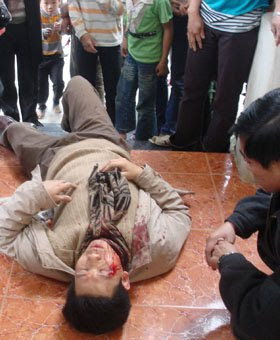 We need to continue to pray for the Church in Vietnam. The following comes from the VietCatholic site:

In a strong-worded statement dated Jan. 20, Hanoi Archdiocese condemns the escalating violence against Catholics at Dong Chiem by the local government reporting that a group of priests and religious, on their way to visit the parish, have been attacked causing a Redemptorist Brother bloodily injured.

Redemptorist Br. Anthony Nguyen Van Tang after being attacked
The statement signed by Fr. John Le Trong Cung, Vice-chancellor of Hanoi Archdiocese, explained that a group of priests and religious of Hanoi Deanery had wanted to visit the parish after the leak out of news of escalating violence against parishioners and priests of Dong Chiem which, as of Jan. 20, “was completely besieged as police at checkpoints prohibited any outsiders to get in.”

The archdiocesan delegation “was stopped by police force at Xay Bridge, 500m away from Dong Chiem where the attack occurred.”

“The victim was savagely assaulted until he became unconscious. The shirt of the lay man, and the one of a motorbike driver, who helped to transport him to a nearby parish, were soaked with the Redemptorist's blood,” the priest continued noting that locals recognized that attackers were “police from inner city of Hanoi”.

The statement of Hanoi Archdiocese went on expressing its great concern on the violent situation at Dong Chiem.

“Hundreds of anti-riot police, militiamen, and plain-clothes police are deployed in the area to blockade and close all gateways to and from the parish.”

Moreover, “Fr. Nguyen Van Huu, pastor of the Dong Chiem, and his assistant priest, Fr. Nguyen Van Lien have been repeatedly summoned and interrogated by police”, and “parishioners have been subjected for beatings and massive arrests.”

Listing the names of 16 detainees, the statement of the archdiocese briefly described how they had been arrested. Some were arrested on the way to the local market. Some were seized at home and their relatives who protested their detention were brutally beaten.

The statement observed that it was the beatings and massive arrests of parishioners that turned the peaceful life of this poor farming hamlet of Dong Chiem upside down. Also, parishioners have suffered a ruthless wave of mental persecution with messages on public loud speakers pouring threatening language all day long.

Facing the wake of outright persecutions, the archdiocese has asked all Catholics to “fervently pray for priests and parishioners of Dong Chiem, especially for those who have been jailed and attacked, in this time of difficulty; and for human rights are soon to be respected”.

Parishes are requested to sing the Peace prayer of St. Francis of Assisi at the end of each and every Mass until and only when the persecution against them stops and justice for all is restored.
Posted by Padre Steve at 9:51 PM