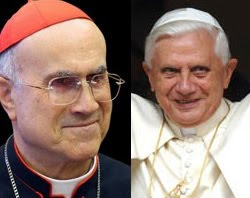 Our Salesian Cardinal Bertone has been reconfirmed as Secretary of State in Rome. We Salesians are blessed! The following comes from the CNA:
In a letter published today by L’Osservatore Romano, Pope Benedict XVI confirmed that Cardinal Tarcisio Bertone will remain Vatican Secretary of State although he has reached the age at which prelates are required to submit their resignation to the Vatican.

The cardinal celebrated his 75th birthday on December 2, 2009.

In the letter dated January 15, the Holy Father thanked Cardinal Bertone “for the good carried out” during the years of his “priestly and episcopal ministry.” The Pope then expressed his appreciation for the “long course” of their collaboration stemming from the cardinal's “work as consultant to the Congregation for the Doctrine of the Faith.”

“I also recall your delicate work in establishing dialogue with Archbishop Marcel Lefebvre,” the Pontiff continued. Also, “I will never forget the visit in Vercelli, which was for me an occasion for a renewed encounter with a great witness of the faith, St. Eusebius of Vercelli.”

After noting that it was John Paul II who called the cardinal to serve in the Roman Curia, Pope Benedict expressed his admiration for the “sensus fidei” (sense of faith) of Cardinal Bertone, as well as his “doctrinal and canonical” training which has enhanced his work “in the Congregation for the Doctrine of the Faith.”

Because of all these qualities, the Holy Father continued, “I decided in the Summer of 2006 to name you my Secretary of State, and today they are the reasons for which I would like to retain your valuable collaboration.”

In conclusion Pope Benedict XVI expressed his best wishes to the cardinal for his work, entrusting him to the Mary Help of Christians.
Posted by Padre Steve at 12:39 PM