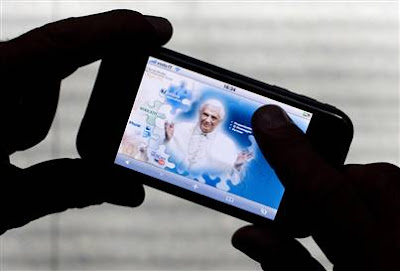 The Holy Father is encouraging Priests to blog! I love it! He knows this is a great means of evangelization. Technology is here to stay and we need to use it to put out the Good News! Here is the story from Fox News:

Pope Benedict XVI has a new commandment for priests struggling to get their message across: Go forth and blog.

The pope, whose own presence on the Web has heavily grown in recent years, urged priests on Saturday to use all multimedia tools at their disposal to preach the Gospel and engage in dialogue with people of other religions and cultures.

And just using e-mail or surfing the Web is often not enough: Priests should use cutting-edge technologies to express themselves and lead their communities, Benedict said in a message released by the Vatican.

"The spread of multimedia communications and its rich 'menu of options' might make us think it sufficient simply to be present on the Web," but priests are "challenged to proclaim the Gospel by employing the latest generation of audiovisual resources," he said.

The message, prepared for the World Day of Communications, suggests such possibilities as images, videos, animated features, blogs, and Web sites.

"Priests present in the world of digital communications should be less notable for their media savvy than for their priestly heart, their closeness to Christ," he said.Benedict said young priests should become familiar with new media while still in seminary, though he stressed that the use of new technologies must reflect theological and spiritual principles.

The 82-year-old pope has often been wary of new media, warning about what he has called the tendency of entertainment media, in particular, to trivialize sex and promote violence, while lamenting that the endless stream of news can make people insensitive to tragedies.

But Benedict has also praised new ways of communicating as a "gift to humanity" when used to foster friendship and understanding.

The Vatican has tried hard to keep up to speed with the rapidly changing field.

Last year it opened a YouTube channel as well as a portal dedicated to the pope. The Pope2You site gives news on the pontiff's trips and speeches and features a Facebook application that allows users to send postcards with photos of Benedict and excerpts from his messages to their friends.

Many priests and top prelates already interact with the faithful online. One of Benedict's advisers, Cardinal Crescenzio Sepe, the archbishop of Naples, has his own Facebook profile and so does Cardinal Roger Mahony, archbishop of Los Angeles.

In Saturday's message -- titled "The priest and pastoral ministry in a digital world: new media at the service of the Word" -- Benedict urged special care in contacts with other cultures and beliefs.

A presence on the Web, "precisely because it brings us into contact with the followers of other religions, nonbelievers and people of every culture, requires sensitivity to those who do not believe, the disheartened and those who have a deep, unarticulated desire for enduring truth and the absolute," he said.

Monsignor Claudio Maria Celli, who heads the Vatican's social communications office, said that Benedict's words aimed to encourage reflection in the church on the positive uses of new media.

"That doesn't mean that (every priest) must open a blog or a Web site. It means that the church and the faithful must engage in this ministry in a digital world," Celli told reporters. "At some point, a balance will be found."

Celli, 68, said that young priests would have no trouble following the pope's message, but, he joked, "those who have a certain age will struggle a bit more."