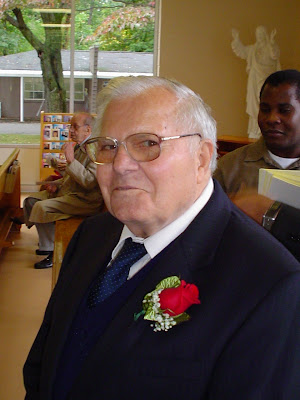 One of our beloved Salesian Brothers has passed away. Please pray for the repose of the sould of Br. John Cauda, SDB. Here is the obituary from Fr. Michael Mendl, S.D.B.:

Brother Cauda was born at Montá d’Alba, Italy, on July 27, 1922, to Agostino and Anna Calorio Cauda. He was baptized three days later in the parish church of St. Anthony the Abbot.

Brother Cauda studied at the Salesians’ well known trades and professional school in Turin, Conte Rebaudengo, which he entered in 1935. From there he was admitted to the novitiate at Villa Moglia, Chieri, in 1939, and made his first religious profession there on August 16, 1940.

After two years of additional training, he was assigned to huge Bernardi Semeria technical school at Colle Don Bosco, near Castelnuovo, to teach cabinetmaking. He was a master craftsman and a dedicated instructor. He taught there for four years.

In 1946 Brother Cauda was among a cadre of brothers recruited to come to the U.S. when the New Rochelle Province needed skilled craftsmen for its technical schools. He was first assigned to Don Bosco College in Newton, N.J., to learn English and teach his craft to young brothers and aspirants to the brotherhood. Then in 1948 he was one of the founders of Don Bosco Technical High School in Paterson, N.J., where he taught until 1961, as well as in three more postings, 1965-1969, 1971-1981, and 1997-2002. He guided not only the high school students in the cabinetmaking shop—who included aspirants to the brotherhood in the 1948-1961 period—but also young Salesian brothers who were learning the craft.

When the brotherhood aspirants and young brothers moved to Don Bosco Juniorate in Haverstraw, N.Y., in 1961, Brother Cauda moved with them and taught there for four years. He returned the Haverstraw in 1969-1971, after the aspirantate had closed, as part of the staff of the Marian Shrine. In additional to wood work that still needed to be done, Brother Cauda was blessed with a green thumb and did a lot of gardening, maintaining beautiful shrubs and flower beds to please visitors to the Shrine and flowers to adorn the chapels and outdoor altar. He was also on the Shrine staff from 1983 to 1997, serving as the administrator of Blue Gate, the Salesian nursing care facility on the Stony Point part of the property, from 1983 to 1988. He retired to the Marian Shrine in 2002 after Don Bosco Tech closed. Late last year Brother Cauda moved into Northern Riverview Nursing Home in Haverstraw; he remained a member of the Marian Shrine Salesian community.

The funeral arrangements are

Brother Bruno Busatto, S.D.B., who knew Brother Cauda for 60 years, states that Brother Cauda “was very generous with his time and never refused me when I asked him for a favor, especially where work was concerned,” and that “he is going to be missed also by the people of his home town, who were very fond of him.”

“Brother John took to heart Don Bosco’s promise to those who faithfully followed Christ in the Salesian Society: they would have bread, work, and paradise! Brother John certainly exemplified the sanctity of the work ethic, and so we believe he is now enjoying the ultimate reward promised by our founder, a place in the Salesian garden in paradise.”