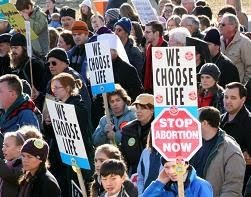 It was a sea of people! Everytime I go to the March for Life I am impressed by the sea of humanity! This year was no different. Here is the story of yesterdays march from CNA:

Hundreds of thousands of people are gathered in the nation's capital today to mark the anniversary of Roe v. Wade and protest abortion in the annual March for Life. Gathering from all over the country, protesters of all ages first heard from prominent pro-life, political and religious leaders before beginning the march.

Congressman Chris Smith (R-N.J.) was among the politicians who addressed the crowd on Friday, saying, “Thank you one and all for being an important part of the greatest human rights struggle on earth – the right to life movement. By the grace of God, we stand behind, with and unabashedly for both victims of abortion – women and children.”

The sheer number of people has caused a traffic advisory to be issued for the District. The volume of protesters has also allowed for two separate marches to take place. The first route will proceed East on Constitution Avenue to First Street, NE, then South on First Street, NE, to the United States Supreme Court where they will rally and then disband.

CNA contacted the D.C Metropolitan Police Department for a crowd estimate but was told that due to disputes in the past between the city and protest organizers over the amount of people gathered, they have stopped giving estimates. However, police said that the march has progressed peacefully and without indecent thus far.

According to EWTN, 300,000 demonstrators are estimated to be taking part in the March for Life.

Just one day before the March for Life in Washington D.C., the results of a new survey put out by the Knights of Columbus and Marist College showed that the number of Americans who say they are pro-life is continuing to grow. Members of the Millennial generation (18-29 year-olds) say abortion is “morally wrong” at a rate of 58 percent.

In addition to showing that more Americans are becoming pro-life, the results showed that the upcoming generations are more pro-life than those nearing retirement.