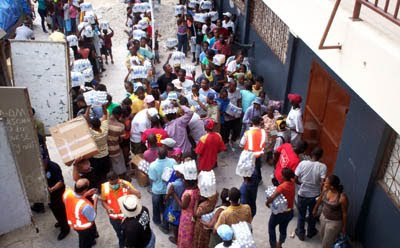 Here is the latest update on the situation in Haiti from the Salesians:

In New Rochelle, Salesian Missions is trying to collect information related to six areas of concern:

2. setting up infrastructure through a local emergency office and satellite phone contact;

3. finances: collecting and distributing funds; partnering with others

4. outgoing information: getting updates from Haiti, preparing all sorts of reports, financial accounting;

6. public relations: collecting and sharing information, photos, video from all our Salesian partners, as well as more general information about Haiti.

Fr. Mark Hyde arrived in Santo Domingo on Wednesday evening and had a first talk with the provincial and his team right away. Before leaving New York, Fr. Mark was interviewed by NBC News on relief programs in Haiti. CNN has offered a national pro bono advertisement campaign for Salesian emergency relief programs worth $10,000.

The SDBs are sheltering 3,500 refugees at Thorland. Photos from this site were posted by ANS several days ago. But many of them still need tents. More dramatic is what the FMAs are doing: caring for 3,500 at Pétion-Ville and 7,000 at their school in Thorland. The sisters report that they have many children without parents.

Sr. Annecie Audate, animator (superior) in Thorland, writes: “We have divided the camp into sectors to facilitate order. We have distributed approximately 800 tents to the people and also distributed water and some help given to us by our sisters in the Dominican Republic. Every morning we have the celebration of the Holy Mass with all the people present and in the afternoon we pray the Rosary and evening prayer together or have [Eucharistic] adoration.”

The SDBs have a water truck moving about the city dispensing clean drinking water, and two more trucks will soon be on their way.

Pictures pertaining to the food distribution mission to Haiti have be transmitted via separate e-mails. The 11 trucks from the D.R. (1 + the 10-truck convoy) went to Pétion-Ville. On January 21, three more trucks with 1,500 bags of dry rations were leave Barahona with Thorland as their destination. Each of these bags will serve one family for three days, for a total of more than 20,000 meals.

Fr. Zucchi Olibrice confirmed the following numbers of students before the earthquake: mini schools: 20,000; three-month short technical courses at ENAM: 360; regular students at ENAM: 1,040. The UN Disaster Assessment & Coordination Team (UNDAC) has confirmed that an On-site Operations and Coordination Center (OSOCC) team was sent to ENAM on Monday, January 18. Apparently they made some sort of survey but didn’t act to recover any bodies; the report we received was vague.

Fr. Zucchi told Mr. Ortega that there were 200 casualties among the ENAM students. They were 5-17 years old, some of the best and brightest young women and men studying to be teachers.

In addition, 19 people were killed at the Little Schools facility headquartered at the ENAM-LAKAY compound.

Those whose bodies have been recovered at these places, including 85-year-old Brother Hubert Sanon, have been buried in a common grave near the school.

The church and parish center of Cite Soleil have collapsed around children who were at catechism classes. Rescue teams are still working to find people alive in the rubble.

An OCHA (UN Office for the Coordination of Humanitarian Affairs) report dated January 19 states: “Minor damages were reported in Les Cayes (South department) where 12 houses collapsed and 500 people where wounded. Health structures in the area are overwhelmed and 200 people are displaced.” There is a Salesian school with youth center, and three confreres, at Les Cayes; we have not received any damage reports from them.

VIS (the Italian Salesian NGO) has offered to support the coordination of emergency relief and the installation of the coordination center. In addition to its own volunteers, VIS is ready to send experts in relief management for identified special tasks. The joint provincial meeting to take place on Friday will review this offer as well as the offer received from the Spanish Salesian NGO Juventud y Desarrollo (JyD).

BEGECA, a German procurement agency, has offered its services. BEGECA is recognized by the disaster relief department of the EU – ECHO – for purchasing relief items in their emergency programs. BEGECA has been a partner of Salesian NGOs for many years. A coordination officer from BEGECA will soon be posted in Port-au-Prince.

BEGECA also has offered a plant for cleaning 2,000 to 3,000 liters of water/hour in Port-au-Prince. The offer includes sending two technicians for its installation and training in Haiti, free of charge. 1,000,000 water cleansing pills from Jugend Eine Welt in Bonn are already en route to Santo Domingo for Haiti. Another 500,000 have been offered by Jugend Eine Welt Austria.

Fr. Mark spoke with Cross International USA’s president, who confirmed an offer of 200 containers of relief supplies— dry food, rice, beans, cooking oil, personal hygiene kits, drinking water, blankets, and tarps—for different relief agencies in Haiti, including the Salesians in the first place. Cross International has confirmed that they are ready to ship the first containers within the next 2-3 days.

A support center will be established in Santo Domingo with an implementation office in Port-au-Prince. Support offers have been received from JyD and VIS. An offer for a professional with Creole proficiency to serve in the support center has been made by JyD.

The logistical support center for emergency relief will be placed in Barahona, where the SDBs have been offered open space at the international airport at Barahona for temporary storage of the containers. Fr. Pichardo, the provincial, has also authorized making the chapel in Barahona more secure in order to use it immediately for storage space.

The donated food stuffs and other relief items will be trucked from Barahona to Jimani, D.R. (on the southernmost border with Haiti), where the SDBs are currently looking for warehouse space for repacking of donated good into smaller family-size packages. Smaller packages will then trucked be to Port-au-Prince. The Salesians of Haiti still fear that security for a larger warehouse in Haiti is not yet possible. Target distribution areas in Port-au-Prince are Thorland (Carrefour), Cité Soleil, ENAM, and Jacmel (an FMA house).

CNN.com has added Salesian Missions to the approved charities on its “Impact Your World” section of its site, in addition to donating $10,000 in free advertising for our relief effort in Haiti. Those ads will begin running later today.

The Sandals Foundation (the philanthropic arm of Sandals Resorts International) has designated Salesian Missions as one of the recipients of funds from its Haiti Relief Fund. Press Release: http://www.prweb.com/releases/Haiti_Earthquake/Disaster_Relief/prweb3456514.htm

On Friday, January 22, Fr. Mark Hyde, SDB, Martin Diggs (SM-NR photographer), Fr. Juan Linares, SDB, and Fr. Victor Pichardo will travel to Port-au-Prince by helicopter for a coordination meeting with the Haiti and Antilles provincial councils of the SDBs and FMAs. . Bro. Albert Rodriguez, the Antilles treasurer, and Franklin Ortega, the Antilles director of development, will go by road. The meeting will take place at the SDBs’ Port-au-Prince provincial house at 10:00 a.m.--outside “under a tree” (the building not being safe). Before the meeting, the team will visit damaged Salesian sites in Port-au-Prince. The return to Santo Domingo is scheduled for 3:00 p.m.

Salesian Missions has had a conference call with Visionlink, Inc., in order to put in an emergency relief database. The company has developed emergency communication systems for the Red Cross, various humanitarian aid organizations, and more than 200 pharmaceutical companies.

The Haitian provincial council will start to discern tomorrow on priorities and general future organization of their activities in Haiti. There are offers to support the reconstruction of Salesian educational infrastructure from Gobierno de Castilla y Leon (through JyD), Misereor/city of Aachen (through Salesian Missions, Bonn), the German Ministry for Economic Cooperation & Development–BMZ (through the Salesian NGO Jugend Dritte Welt), and the Rector Major.

Salesian institutions all across the U.S. are praying and raising funds for their “Salesian brothers and sisters” in Haiti. For example, see Don Bosco Prep in Ramsey, N.J.:

FMAs from different provinces have expressed their readiness to leave for Haiti to help, and there are a dozen lay volunteers from their houses in the D.R. who are ready to go. But because of security problems they have not been free to go the Haiti. The FMAs of the United States are gathering emergency items to have them on site as soon as possible. They are also receiving help and solidarity from the sisters of other religious institutes in various parts of the world and from many lay people who have been affected by the enormity of the damage caused by the earthquake. The FMAs in Haiti, in turn, are assisting the sisters of other congregations who can’t get it anywhere else. That has included arranging transport to the D.R. for those seriously injured.
Posted by Padre Steve at 12:00 AM