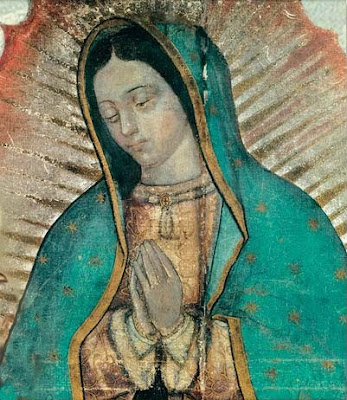 This is a good sign! The following comes from Fides:

The largest pilgrimage in history, nearly 100,000 pilgrims, has made its way to the Hill of Tepeyac. After three intense days of walking, at dawn on Wednesday, February 24, a pilgrimage from the Diocese of Toluca reached the Basilica of Guadalupe. With great faith, devotion and love, many believers have come here to venerate the Mother of God. The nearly 95,000 pilgrims from different municipalities belonging to the State of Mexico have completed a course of about 50 kilometers. Together with the pilgrims from the Diocese of Toluca, there are also many communities of faithful from the Diocese of Atlacomulco and on this occasion, for the first time, the new Archdiocese of Tenancingo.

The last part of the trail began at the community of Cuajimalpa. The march started at approximately 10pm on Tuesday, February 23, to reach the doors of the Basilica at 6am on Wednesday, February 23. On the day of arrival, the pilgrims rested near the Shrine of Guadalupe and attended the morning Mass presided by the Bishop of the Diocese of Toluca, Bishop Francisco Javier Chavolla Ramos. In this celebration, the pilgrims sought the intercession of the Virgin of Guadalupe in obtaining God's blessing on the diocesan activities, for the permanent mission, and for the lives of the individual believers.

The Diocese of Toluca sent Fides the text used for the preparation of the pilgrimage to the Basilica of Guadalupe, which helps to understand the meaning and significance of the pilgrimage, and offers a reflection on encountering Jesus through Mary.
Posted by Padre Steve at 11:42 PM