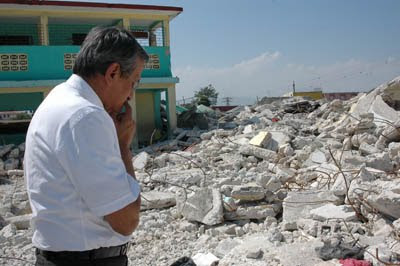 Our Salesian Rector Major, Fr. Pascual Chavez, SDB, began his visit to Haiti yesterday. Let's pray for him as he ministers to the people there and as our congregation begins to restore hope to the young people who need us in this tragedy struck nation. The following comes from the Salesian News Agency:

Joy and sorrow, dismay and hope marked the first day of the visit of Fr Pascual Chávez to Haiti. Speaking to the youngsters and the Salesians he said “Our purpose is, first of all, to give hope to Haiti.”
The Rector Major had arrived in the evening of 11 February at the airport in Santo Domingo. He was welcomed by the Provincial of the Dominican Republic, Fr Vichtor Pichardo who yesterday morning 12 February accompanied the Rector Major to the capital of Haiti in a helicopter. Having arrived at Port-au-Prince, 30 days after the earthquake which devastated the heart of the capital, the IX successor of Don Bosco saw from above the vast areas of devastation.

The helicopter landed in the grounds of the Embassy of the Dominican Republic, which had also been made unfit for use by the earthquake. With the new Superior, Fr Sylvain Ducange, and his predecessor, Fr Charles Jacques, as well as the Provincial of the Sisters in Haiti, Sr. Marie Claire Jean, there was also the Ambassador of the Dominican Republic to Haiti who introduced himself as a Salesian Past Pupil.

The first stop was at Pétion Ville. Here the youngsters welcomed Fr Chávez with joyful songs and a traditional dance. “As sons of Don Bosco, cheerfulness is our attitude, and we are moved by a spirit of optimism as we believe in the re-birth of Haitian people and in the re-founding of the Salesian charism in our country,” Fr Ducange said in his welcoming address. In his reply the Rector Major once again expressed how he himself and the whole Congregation were close to them, full of hope: “Before thinking of re-building the walls it is necessary to give hope to the people and to the young.”

He then visited the Salesian places most affected by the earthquake, both regarding the buildings and with the loss of life: the “Ecole Nationale des Arts et Métiers” (ENAM). Accompanying the group was Fr Mark Hyde, from the New Rochelle Missions Office, who had already been in Haiti for several days coordinating relief efforts. Visiting the various halls of the Institute and noting the damage and destruction, the Rector Major stopped for a few moments of silent prayer at the place where 12 Salesian pupils were buried.

Much greater and much deeper his emotion in front of the piles of rubble which still cover the bodies of about 150 youngsters. The silence in the courtyard filled with rubble made more heart-rending the exclamation: “How is it possible! Young people just starting out on life!” The Rector Major spoke to the Italian civil defence and fire service workers who are removing the debris of the Enam, stressing the significance of the place and the sacred character it tragically now has.

However, life has not stopped in the ENAM. The youngsters and the staff of the “Lakai” welcomed Fr Chávez in a short ceremony with songs and an address. “Now we must look to the future; it is up to you to give hope to Haiti,” the Rector Major told them. At the end, the youngsters of the “Lakai” gave Fr Chávez an oil painting.

Here too the Rector Major met an Italian delegation led by Naval Captain Gianluigi Reversi, Commander of the aircraft carrier “Cavour” from the Italian contingent in Haiti. “We wanted to work with the Salesians because we have seen, also here, their commitment to the young and to the poor,” the spokesman of the press office of the group said.

The Salesian parish of Cité Soleil, rendered unfit for use by the earthquake, the reception camps set up at Drouillard, the headquarters of the Vice Province were visited next. In spite of the pain in seeing how deep the wounds suffered by the Salesian centres, Fr Chávez never failed to bring hope and a spirit of optimism.

“We are very pleased with the visit of the Rector Major and we are conscious of the closeness of the whole Congregation. This encourages us to go ahead and to overcome all the difficulties!” often repeated Fr Ducange, who on 30 January was installed as the new Superior of the Vice Province of Haiti.

Early in the afternoon Fr Chávez walked through the streets to see the places in the city most affected. Looking at the ruins of the Cathedral he said to those with him: “God is walking through these streets telling us that he is on the side of those who are suffering, those still under the rubble, those who have seen reduced to dust the little they had managed to achieve in their whole lives.”

The last stop on the first day was Fleuriot, the postnovitiate house of formation for various religious orders present in Haiti, rendered completely out of action. “We must rebuild for the formation of our Salesians and in order to continue to offer this service of formation to the local church”, were the words of encouragement and the proposal of the Rector Major.

At the end of the day he had a meeting with the Council of the Vice Province which had already begun to look to the future. 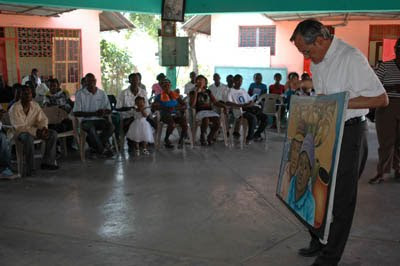