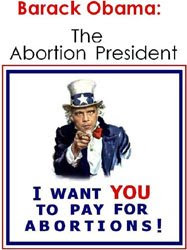 This is a very big prayer need. The following comes from Catholic Fire:

President Barack Obama has proposed changes he thinks should be included in the changes made to the Senate health care bill as Democrats move ahead with their plan to railroad the bill thorough Congress via reconciliation. However, Obama does not propose any changes to the massive abortion funding.

The current Senate bill contains massive abortion funding that could force taxpayers to fund hundreds of thousands of abortions and it has other pro-abortion problems.

"In a last gasp to save his top domestic priority, President Obama is taking a new approach to health care: 'bipartisanship.' Yet his proposal released today missed the mark on the most significant area of bipartisan agreement: limiting public funds for abortion.

"Over seventy percent of Americans oppose funding abortion through health care reform legislation. And last fall, one quarter of the President's own party joined Republicans to support the consensus Stupak-Pitts Amendment to exclude abortion coverage in the House.

"In the face of obvious bipartisan consensus against abortion funding, the President remains deaf to the voices of American taxpayers. President Obama's most precious domestic priority is on life support, but he still refuses to jettison abortion coverage. It appears that abortion ideology is more precious to this president than his top domestic priority.

"On behalf of the majority of Americans who opposed funding abortion with our tax dollars, I urge participants at Thursday's health care summit – GOP members especially – to defend the American conscience. National consensus will only be reflected in clear language to ensure taxpayer dollars will not fund abortion or any health care plans that cover abortion. This is the federal status-quo, and it's what an increasingly pro-life America demands."
Posted by Padre Steve at 7:55 PM