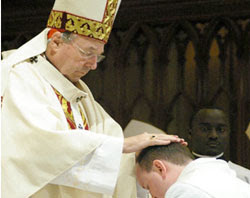 World Youth Day continues to bear good fruit! 2 years after the event took place in Australia the Church continues to see good things happen. Here is the story from CNA:

A record number of men are entering seminary for the Archdiocese of Sydney and up to six men will be ordained to the priesthood this coming June, a rise that observers partly attribute to the influence of World Youth Day 2008.

On June 11, between four and six men will be ordained priests by the Archbishop of Sydney Cardinal George Pell. This is the largest number of men ordained into the Archdiocese of Sydney since 1988, the archdiocese reports.

Two Uganda-born men who studied at the Seminary of the Good Shepherd in Homebush, Australia will be ordained in their home country and will return to serve in Australian parishes.

“While Australia has been battling against a shortage of priests since the late 1980s, it now looks as if interest in the priesthood and men seeking priestly vocations is once more on the rise,” the archdiocese said on Friday.

In February, 10 men were accepted as candidates for the priesthood by the Seminary of the Good Shepherd, and they have since begun their first year of study.

"There is no doubt there has been an upsurge in interest in a priestly vocation," said seminary rector Fr. Anthony Percy.

Fr. Percy attributed the trend to World Youth Day 2008 but also to past World Youth Day Events and to the Year for Priests, proclaimed by Pope Benedict XVI in June 2009.

Another sign of vigor in Catholic Australia is Sydney’s Theology on Tap program, which attracts between seven and eight hundred people to P.J. Gallagher’s Irish Pub in Parramatta on the first Monday of each month. They drink, socialize and hear speakers on theology, faith, the Church and life in general.

"Today many young people are seeking deeper meaning to their lives and not just looking for a career but for a vocation which can answer the big questions of life," Fr. Percy added. "In this post modern culture there are no values, no standards and no foundations on which to build minds. But young people really want these things and in a world of dysfunctional families and society generally, they are looking to the Church for stability."