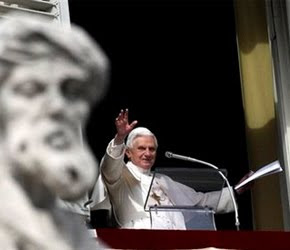 The Holy Father followed a visit to the Caritas homeless shelter in Rome on Sunday morning with the traditional midday Angelus at the Vatican. He spoke of Jesus' presentation of the Beatitudes and the importance of implementing their lessons and seeking justice in society.

The Beatitudes, announced in the Gospel of Luke, are based on the existence of “a divine justice that picks those who have been wrongly humiliated back up and humbles those who exalt themselves," said the Pope before the Angelus.

"The first will be last and the last will be first," quoted the Holy Father, adding that "this justice and this beatitude will be realized in the 'Kingdom of Heaven'... that will reach its fulfilment at the end of time but that is already present in history."

"Where the poor are consoled and admitted to the banquet of life, there, already, is manifested the justice of God," underscored the Pope. "This is the task that the disciples of the Lord are called to carry out also in today's society."

The Holy Father brought up the reality of this ideal which he had witnessed upon his visit earlier on Sunday morning to the Caritas homeless shelter at downtown Rome's Termini Station. He encouraged "all who work in this worthy institution and everyone, in all parts of the world, who work voluntarily in similar works of justice and love."

The Pope continued by teaching that the Gospel "responds positively to man's 'thirst for justice' " and proposes a revolution, not of social or political nature, "but that of love" that Christ achieved on his death and resurrection.

On these events, he concluded, are based the Beatitudes, which propose “a new horizon of justice, inaugurated by Easter, thanks to which we can become just and build a better world."

The Holy Father also invited everyone to read and meditate on his Message for Lent, which considers the theme of justice, in preparation for the coming Lenten season to start this Wednesday.

He prayed that we let ourselves be guided by Mary during this season "to be freed from illusion and self-sufficience, to recognize that we need God... and so enter into his Kingdom of justice, love and peace.

After the Angelus, the Holy Father directed his attention to the celebration of the lunar New Year celebrated in parts of Asia, especially in Vietnam and China. Citing the opportunity this holiday provides to strengthen family and generational ties, he expressed his wish for those who are celebrating to "maintain and grow the rich heritage of spiritual and moral values that are rooted concretely" in their cultures.
Posted by Padre Steve at 9:01 AM