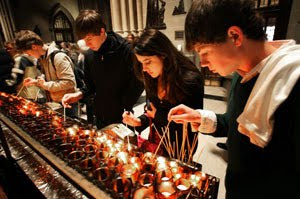 Anyone who works with young people knows there is a lot to be hopeful about. The faith in our young people is strong and they have a great deal to offer in their zeal, creativity and desire to know and live the faith. There are also lots of reasons to be cautious. This study does an excellent job sketching an image for us of the faith of the young faithful. The following comes from the CNS:

American Catholic adults under 30 share the commitment of older generations to philanthropy and volunteerism, but are more likely to believe that morals "are relative," according to a new survey commissioned by the Knights of Columbus.

The survey asked a wide range of questions about ideology, religious practices and beliefs, life goals and feelings about the nation's future, comparing the answers across generations and among Catholics in general, practicing Catholics who attend services at least once a month and Americans in general.

Among the survey's positive findings:

-- When asked to choose among five long-term life goals, 31 percent of millennials chose "to be spiritual or close to God" as their top goal, the highest among any generation.

-- Two-thirds (67 percent) of millennials and 71 percent of Catholic millennials said they had volunteered their time in the past 12 months, roughly equal to the percentages among other generations.

-- A majority of millennials (56 percent)and Catholic millennials (52 percent) had donated money to a charity in the past year. Although the percentages were higher at 67 percent for both Americans in general and American Catholics overall, the difference could be attributed to the fact that the younger people have lower incomes.

But the survey also had some negative findings:

-- Nearly two-thirds (64 percent) of millennials in general and 82 percent of Catholic millennials agreed with the statement that "morals are relative; that is, there is no definite right or wrong for everybody." A majority in every category except practicing Catholics (46 percent) agreed with that statement.

-- Sixty-one percent of Catholic millennials said they believe it is OK for people of their religion to practice more than one religion, compared to 54 percent of Americans in general and 43 percent of practicing Catholics.

The survey also asked respondents to judge whether certain choices were morally acceptable, morally wrong or not a moral issue.

The majority of Americans (57 percent), millennials (58 percent), American Catholics (61 percent) and Catholic millennials (66 percent) said abortion was morally wrong, while more than half or nearly half of each group said gambling was not a moral issue.

The highest degree of unanimity was on claiming someone else's work as your own -- with more than 90 percent of each group saying it was morally wrong -- and on marital infidelity, judged morally wrong by percentages ranging from 87 percent (Catholic millennials) to 90 percent (Americans in general).

"There is much good news for the church in this survey, especially when we consider that two in three Catholic young people want to learn more about the faith," said Carl Anderson, supreme knight of the Knights of Columbus, in a statement from Rome, where he was attending meetings at the Vatican.

"The church has a great opportunity to evangelize and has much to build on with the next generation of Catholics, but it must act and teach in a way that makes clear the reasons for church teaching as part of what our pope calls our 'yes' to Jesus Christ," Anderson added.
Posted by Padre Steve at 9:58 PM