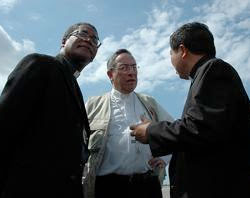 The following is from the CNA:

Cardinal Oscar Rodriguez Maradiaga, the president of Caritas Internationalis, visited Haiti on Monday to deliver aid from Honduras and to express solidarity with the country after its devastating January earthquake.

The cardinal went to Port-au-Prince’s destroyed cathedral and visited the rubble of the archdiocesan offices where Archbishop Joseph Serge Miot and a number of his colleagues were killed.

According to Caritas Internationalis, he then proceeded to the Renaissance Hospital and the Champ de Mars makeshift camp, where tens of thousands of people have taken refuge.

Cardinal Rodriguez met representatives of the Haitian Bishops’ Conference to discuss relief and reconstruction efforts. He also spoke to international and national staff at the Caritas Haiti headquarters.

“I want to thank all the Caritas of the world for their support. It is essential we go on, in order to rebuild Haiti culturally and spiritually as well as materially,” he commented.

Caritas members in 40 countries have collected $198 million in private donations for quake relief. Governments and institutions have pledged $36 million to Caritas for the effort.

Caritas reports that it has fed over 500,000 people, given shelter kits to 43,000, and given medical treatment to 12,000 in Haiti. The two-month relief effort will be followed by a three to five-year reconstruction program focusing on housing, education, and livelihoods.