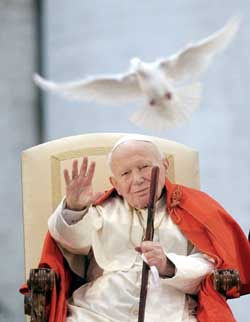 In Colombia, where Cardinal Dziwisz traveled to participate in a conference on the legacy of John Paul II, the cardinal remarked that the beatification process of the pilgrim Pope “is practically finished.”

“In order for the beatification to take place, it is important that the Church recognizes a miracle in which he has interceded. There is a case that is currently being investigated and it is of themiraculous healing of a French nun suffering from Parkinson’s.”

Regarding the date of the beatification, the cardinal said, “It is not known, but his tomb is visited by thousands who thank him for favors.”

“Not only do Christians want to see him made a saint, but Jews and Muslims as well.”

Speaking later of the affection and fervor of the people towards John Paul II, Cardinal Dziwisz said, “He changed the world from the political and religious points of view; he taught that the solution to problems lies in solidarity and in love. He overcame all the thresholds. His teachings should be applied today to help this world in crisis.”

Responding to those who criticized the short length of JPII's cause for canonization, the Polish cardinal admitted it has been a speedy process, “but one cannot say it has been done poorly. It has been an effective time for delving deeper into the legacy he left. The same ones who criticized him because they did not like his moral positions are the same who are criticizing him now.”

Addressing the claim that John Paul II whipped himself and slept on the floor, the Archbishop of Krakow said, “I cannot confirm it or deny it. He was a man of great spirituality, his principal characteristic was having a spirit of prayer and contemplation. In many convents today the practice of penance through flagellation exists, and it has given us other great saints such as St. John of the Cross and St. Theresa.”

Speaking to his Colombian audience, Cardinal Dziwisz added that Pope John Paul II “always said that Latin America is the continent of hope. He loved Colombia and had many friends here, cardinals and priests, because the presence of Colombia in Rome has always been significant.”

Also during his Colombia visit, in an interview with the Colombian daily, “El Tiempo,” the cardinal shared John Paul II's requests and actions just before he died.

After saying that the late-Pope "died like a holy man," the cardinal added that JPII "said goodbye to his colleagues, to Cardinal Ratzinger (now Benedict XVI), even to the housekeepers. He asked that the entire Gospel of St. John be read to him and thus he prepared to go.

“There was an incredible peace.”