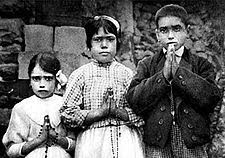 Today is the 5th anniversary of the death of Sister Lúcia:

Sister Lúcia of Jesus and of the Immaculate Heart, better known as Sister Lúcia of Jesus – (March 22, 1907 – February 13, 2005) was a Roman Catholic Discalced Carmelite nun from Portugal. She was one of the children whom Catholics believe experienced a series of apparitions of the Virgin Mary in Fátima, Portugal in 1917.

Between May and October 1917 Lúcia and her cousins Jacinta and Francisco Marto reported visions of a luminous lady, believed to be the Virgin Mary, in the Cova da Iria fields outside the hamlet of Aljustrel, near Fátima, Portugal. The lady appeared to the children on the 13th day of each month at approximately noon, for six straight months. The only exception was August, when the children were kidnapped by the local administrator. That month they did not see the Lady until after they were released from jail, some days later.

According to Lúcia's accounts, the lady told the children to do penance and to make sacrifices to save sinners. The children wore tight cords around their waists to cause pain, abstained from drinking water on hot days, and performed other works of penance. Lúcia said that the lady asked them to say the Rosary every day, to bring peace to the world. Many young Portuguese men, including relatives of the visionaries, were then fighting in World War I.

Read more about her here.
Posted by Padre Steve at 2:35 PM