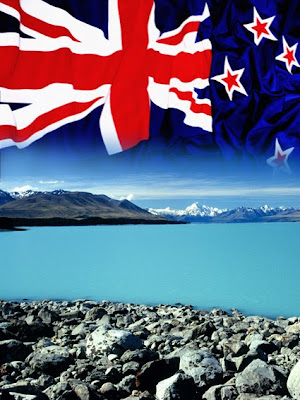 This comes from our Salesians in Australia via Australasia news:

Confreres often just assume that there has been a Salesian presence in New Zealand for many years, and have been surprised to hear that there has not been -- until now! Perhaps they confuse Australians and New Zealanders, as others confuse Canadians and Americans, and the jokes that run between “sparring partners” of this kind are legion, but for very many good reasons, Salesians have now established their first official presence in the sovereign nation of New Zealand, or Aotearoa (“The Long White Cloud”) as many of its indigenous and Pacifican immigrant inhabitants prefer to call it -- for indeed this is one of the “good reasons” for the Salesian presence.

The founding presence of the Salesians of Don Bosco in New Zealand opened its doors to the faithful of the parish at Massey, an outer suburb of Auckland, on the first Sunday of February. Three Salesians have been assigned to this new work: Fr. James Adayadiel, a missionary in the Australia-Pacific presence for many years, and a founding figure in our work in Samoa, is the pastor. He is assisted by Fr. Mika Leilua, a Samoan priest, and Fr. Mathew Vadakkevettuvazhiyil, a missionary on loan from the East Africa Province. There are two churches in the parish: one is in Massey itself (St. Paul’s), and another at nearly Ranui (St. Malachy’s). The faithful come from all parts of the world, but especially Samoa (and other islands in the Pacific), India, and Asia. We have begun our work in the parish, immediately establishing close contact with all the already established groups. Fr. Mathew has already set up contact with the young, and is a regular presence in the parish school.

On Saturday, February 13, the Salesians celebrated Don Bosco. We were not “in charge” for Sunday, January 31, so we shifted the celebration to this day. Past pupils and friends of the Salesians from Australia, Hong Kong, India, the Philippines, and other places formed a community of about 50 people at a Mass celebrated by Fr. Raphel Lobo, an ex-Salesian from the Bombay Province.

The Australia-Pacific presence rejoices in this encouraging new start of Don Bosco’s mission among the people of New Zealand. The people are already asking for information about Don Bosco, his Salesians, and the Salesian work. The best sign of a good Salesian work is good Salesians!
Posted by Padre Steve at 8:54 AM