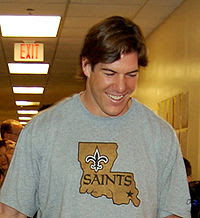 This is great! Saints LB Scott Fujita offers his daily diary leading up to the Super Bowl at NOLA.com:

"It's okay to be pleased, but never satisfied." -- Dick Vermeil

Coach Vermeil was my first head coach in the NFL. He's a legend in the coaching profession, and his reputation as a man who cares more for his players' well-being than the game itself is unquestionable. He taught me to never accept complacency. So here, in the week leading up to the Super Bowl, some would say we've arrived. The Saints did it. Job well done. But let's get one thing straight: We're here to win the whole thing. The Saints are on a mission. No group of people deserves a Super Bowl Championship more than the people of New Orleans. They have been patient, their support has been unwavering, and to be perfectly frank, they haven't had many people looking out for their best interest. But we have been. We care. We're in this thing together.

Let's be honest, the leadership in New Orleans since Katrina hasn't exactly been stellar. But those who have nothing, look to us. Those who'd like to return but can't, look to us. Those who want nothing more than a fair shake, look to us. Why? Because we have our stuff together. We recognize our role, and we don't take that responsibility lightly. They can count on us. Like I said...we're in this thing together.

I heard from Coach Vermeil and Gary Gibbs (our Defensive Coordinator in New Orleans the previous 3 seasons) this morning, who called to share their excitement and best wishes for all of us. Also ran into Bill Parcells at practice today, who was my Head Coach in Dallas in 2005. I hadn't seen him in a few years, so it was great to catch up. He told me how proud he was of me, and that I looked older(?). Not quite sure how to take that last part. I owe him a lot. His desire to trade for me in 2005 really helped get me out of a stale situation in Kansas City, and I credit him with helping get my career back on track.
We had an NFL security meeting this evening...you know, the "what to do's" and "what not to do's" the week of the Super Bowl. The security rep from the league referred to us as "gents" about a dozen times. That might not sound very funny, but picture a room full of immature, overgrown men who have been riding buses all day and are looking for a laugh at someone else's expense. Needless to say, I don't know if anyone could take this guy seriously.
Highlight of the day: Being the first Saint to step off the plane in Miami.

Low-point of the day: Not getting a Nike schwag bag in my hotel room. All the guys who are endorsed by Nike got sweet Super Bowl schwag, with about $5000 worth of merch, including some products from their ACG line, which I love for hiking and for outdoor use. I was endorsed by Nike for seven years, but they voided my contract (after several warnings) for "spatting" my cleats on game-days. Some of us spat, or put tape around our cleats, to keep them tight. Nike, apparently, doesn't like that their precious Swoosh gets covered up. Oh well. Wouldn't be that big of a deal if it weren't for every teammate rubbing it in my face, parading around in all their cool new gear.

Read the rest of the diary here.
Posted by Padre Steve at 4:22 PM