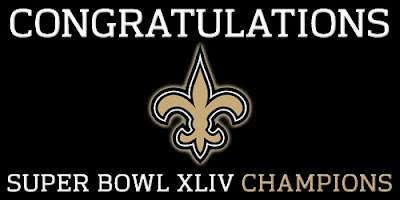 New Orleans Saints quarterback Drew Brees won his first championship because of the things he didn't do in Super Bowl XLIV.

He didn't try to force passes into tight coverage in his team's 31-17 win over Indianapolis. He didn't make the kind of game-altering mistake that ultimately doomed Colts quarterback Peyton Manning. Brees also didn't allow frustration to enter his mind when his offense was settling for field goals instead of touchdowns.

In the end, people will praise the numbers that led to Brees' being named Most Valuable Player of this contest (32-of-39 passing for 288 yards and two touchdowns). What many will underestimate, however, is how carefully Brees conducted the Saints' offense.

He built most of those statistics on short passes. Meanwhile, the big plays that had been a New Orleans trademark were as hard to find as a Saints fan who had never uttered the words "Who Dat?"

This was the beauty of Brees on Sunday. The popular notion was that this game would've been a shootout, especially given the potent passing attacks of the teams involved. Instead, Brees led his team to victory with an approach that was more dink-and-dunk than downfield artistry.

"The first thing we cared about coming into this game was taking care of the football," said Brees, whose efforts helped the Saints secure their first championship in team history. "And the second thing was to be patient. We did both those things and they resulted in a win."

This wasn't the first time Brees had to slow down his offense to achieve optimal results. He played a similar style in the Saints' NFC Championship Game win over Minnesota and his approach was just as noteworthy then. This is a man who led the NFL in passing and guided an offense that averaged a league-high 31.9 points a game. Common sense says he had to be getting a little trigger-happy at some point.

Instead, Brees kept making the plays that kept his team's possessions alive. He'd find rangy wide receiver Marques Colston on crossing patterns and curl routes. He checked the ball down to his running backs when deeper options didn't materialize. And when it came time to execute one of the many screen plays the Saints ran, Brees held on to the ball just long enough to let his receivers maximize their opportunities when the ball finally got in their hands.

The Colts' defense eventually felt the sting of those subtle blows over time.

"It was a combination of our pass rush and coverage [not doing the job]," said Colts safety Melvin Bullitt when asked about Brees' efficiency. "We normally don't have those problems, and I don't know what it was today. A lot of what he got were dump-off passes, but he did a good job. He knew we would be keying on the deep pass so he took the short passes more often."

"I thought Drew was magnificent," said Saints head coach Sean Payton. "We knew he would have to play well, and he handled a lot of our offense at the line of scrimmage. I thought he was fantastic and he's been that way all year."

Though the Saints had only two offensive touchdowns -- Brees was responsible for both -- the quarterback manufactured the kind of possessions that kept the Saints confident and focused. When New Orleans trailed 10-0 after the first quarter, it was Brees who led his team within range for a 46-yard Garrett Hartley field goal.

Brees' leadership was equally important after the Saints opened the second half with an onside kick. After recovering the ball, New Orleans later scored on a 16-yard screen pass to running backPierre Thomas. By the time Brees hit tight end Jeremy Shockey for a 2-yard touchdown pass -- along with Lance Moore on the subsequent two-point conversion -- the Saints led 24-17 and the scent of an upset lingered in the air.

Then all hell broke loose when New Orleans cornerback Tracy Porter intercepted Manning and returned it 74 yards for a touchdown. That play didn't just clinch the game for the Saints. It also was a valuable reminder of how Brees had helped put the Colts in a position to press.

Every New Orleans fan in the country had to be celebrating at that point. Brees had spent most of the past four years talking about how much the Saints had been playing for a fan base still dealing with the aftermath of Hurricane Katrina. Now he had the chance to talk about giving those people a heartfelt gift.

"Four years ago, who would've thought that we'd be here?" said Brees in reference to his signing with the team in 2006, a couple months after Payton had taken the job. "Eighty-five percent of the city was underwater. People had been evacuated to other parts of the country. But the organization and the city decided to rebuild together and that's what we did. Today was the culmination of all that work."

Actually, it also was something else: validation of Brees' impact on this franchise. After producing gaudy numbers over the past four years, Brees helped deliver a title that will only enhance his legacy. He easily could've tried to win a championship by imposing his will on the Colts' defense. Instead, he did what all great quarterbacks do: He let his leadership be the deciding factor in the biggest game of his life.