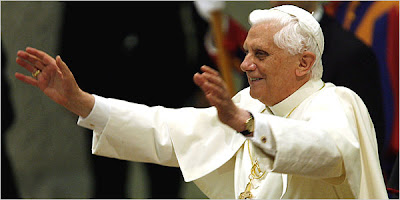 Let's continue to work and pray hard for more vocations to serve the community! Pope Benedict sent his message out regarding the coming World Day of Prayer for Vocations. The following comes from the Catholic News Agency:

Pope Benedict released his message for the 47th World Day of Prayer for Vocations on Tuesday. The message, written on the theme "Witness Awakens Vocations," speaks of the great importance of the witness of priests and religious for encouraging future vocations to the priesthood and religious life.

Granting that success in the promotion of vocations depends in large part on the free action of God, the Holy Father notes in his message that, in addition, "the quality and depth of the personal and communal witness of those who have already answered the Lord’s call to the ministerial priesthood and to the consecrated life" also helps to bear fruits, "for their witness is then able to awaken in others a desire to respond generously to Christ’s call."

The Holy Father cites the examples of the Prophets of the Old Testament dedicating their entire existence to bearing witness to God. Jesus, he says, is the "supreme Witness to God and to his concern for the salvation of all." He further highlights the roles of John the Baptist, Andrew and Philip who in bearing witness to God made disciples of others including Andrew's brother Peter and Bartholomew.

"God’s free and gracious initiative encounters and challenges the human responsibility of all those who accept his invitation to become, through their own witness, the instruments of his divine call," explains Pope Benedict in his message.

This continues to be true in the contemporary Church, writes the Holy Father, as "the Lord makes use of the witness of priests who are faithful to their mission in order to awaken new priestly and religious vocations for the service of the People of God."

The World Day of Prayer for Vocations message includes the Holy Father's perspective on the three aspects of priestly and religious life that he considers "essential for an effective priestly witness."

The first aspect that characterizes this life is friendship with Christ, through which a "man of God" leads others to know and love Him, the Pope says.

Secondly, a priest or consecrated religious makes “a complete gift oneself to God,” which the Holy Father says, "is the source of his ability to give himself in turn to those whom Providence entrusts to him in his pastoral ministry with complete, constant and faithful devotion... enabling them too to become open to meeting Christ, so that his Word may become a light to their footsteps.”

"The story of every vocation is almost always intertwined with the testimony of a priest who joyfully lives the gift of himself to his brothers and sisters for the sake of the Kingdom of God," Pope Benedict points out.

The final aspect, the Pope teaches, is a life of communion by which the priest or consecrated person is "open to all, capable of gathering into one the pilgrim flock which the goodness of the Lord has entrusted to him, helping to overcome divisions, to heal rifts, to settle conflicts and misunderstandings, and to forgive offenses."

He must be an example to youth, notes the Holy Father, of "a communion of life which can reveal to them the beauty of being a priest," so that they will say, "Yes, this could be my future; I can live like this."

Pope Benedict cites the words of Venerable John Paul II, who summed up these aspects when he said that "the very life of priests... their fraternal unity and zeal for the evangelization of the world are the first and most convincing factor in the growth of vocations"

This is also true for the consecrated men and women who by their very life proclaim "the love of Christ whenever they follow him in complete fidelity to the Gospel and joyfully make their own its criteria for judgment and conduct," the Pope writes.

In this way, he adds, by their example they offer themselves as 'signs of contradiction' in society by offering an alternative to the materialism, self-centeredness and individualism present in world.

"By letting themselves be won over by God through self-renunciation, their fidelity and the power of their witness constantly awaken in the hearts of many young people the desire to follow Christ in their turn, in a way that is generous and complete."

Benedict XVI concludes his message for the Day of Prayer for Vocations by observing that "in order to foster vocations to the ministerial priesthood and the consecrated life, and to be more effective in promoting the discernment of vocations, we cannot do without the example of those who have already said "yes" to God and to his plan for the life of each individual."

"Personal witness," he specifies, "in the form of concrete existential choices, will encourage young people for their part to make demanding decisions affecting their future."

The official date for the observation of the World Day of Prayer for Vocations will be Good Shepherd Sunday, the Fourth Sunday of Easter, which falls on April 25 this year.