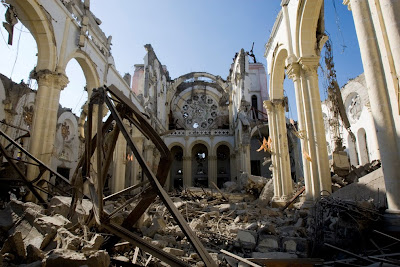 Please continue to pray for the people of Haiti and all those struggling to lift them from this tragedy. The following comes from the CNA:

Haitians have remembered the victims of January’s devastating earthquake with three days of mourning and fasting. Stores, gas stations and banks have closed down and the roads have been emptied to make way for the event’s processions.

From dusk until dawn in Port-au-Prince, loudspeakers broadcast the Gospel, sermons and prayers. Writing in a report on the Caritas blog, Magnier described the mood as “a strange atmosphere of joy, despair and reverence.”

She said that Catholics, Protestants and followers of voodoo joined in the observance.

Since the main places of worship were destroyed, ceremonies took place in the city’s waste grounds, schoolyards and temporary shelter camps.

The solemn mourning processions were made up of people openly grieving. Women were dressed in white, children wore their best clothes and men tied black armbands of mourning around their arms.

“Those who can walk help the injured in their wheelchairs and support those hobbling on crutches. Some sing and dance while others are prostrate,” Magnier wrote.

Thousands of faithful gathered on the steps of the destroyed cathedral for a memorial Mass celebrated by Fr. Serge Chadic, Director General of Caritas Haiti.

A man named Janel told Caritas that all his family members survived the quake. He was at the Mass to support those who were suffering.

“We were all deeply affected by the quake, we must help each other. That is why I am here,” he explained.

A woman named Lérénie was also among those at the cathedral. She sat on a piece of rubble in the middle of the crowd, holding her four-month-old baby in her arms. Her husband and two brothers were killed in the earthquake.

“These are difficult days. As Haitians we have to mourn our dead together,” she commented to Caritas.

Lérénie said she had to cling to her faith. “That and my boy are all I have left,” she said.
Posted by Padre Steve at 5:04 AM