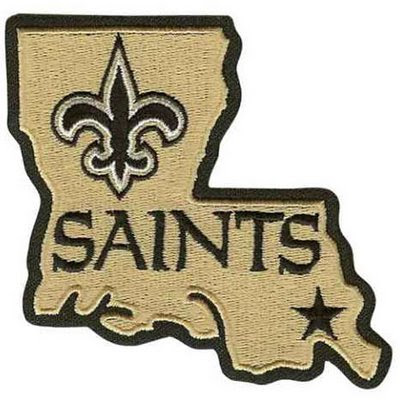 The following comes from James Carville on ESPN:
The Who Dat Nation, as the throng of New Orleans Saints fans was affectionately named after Hurricane Katrina by former Saints QB and radio commentator Bobby Hebert, was not only bouncing off the walls following Garrett Hartley's 40-yard overtime field goal that sent our beloved team to the Super Bowl for the first time in the franchise's 43-year less-than-storied history; they were crashing through walls.

To say the city is now buzzing would be a gross understatement. For so long, the Saints organization has been a metaphor for all the ills of New Orleans -- always trying to get over the hump but continually falling a little bit short; a team and a city short on luck.

Actually, that's a friendly assessment of the franchise's existence.

But during this Super Bowl run, the team has become a symbol for not only what can be but also what is. New Orleans is moving. She's recovering.

But the Saints are more than a symbol of or for New Orleans.

With the hundreds of professional franchises and collegiate teams that dominate major and midsize markets, only a few have become one with the city to the average observer. Think Green Bay Packers. When most sports fans or even casual observers think of Green Bay, Wis., the first and last thing that comes to mind is its professional football team. The Packers are synonymous with the city. The same can be said to a large extent with the Boston Red Sox and the Pittsburgh Steelers. What this Super Bowl run has done possibly more than anything else is forever link this luck-starved franchise with the city I am now proud to call home. They're one and the same.

For locals, the Saints have been as much a part of the DNA of the city as po-boys or second-line parades or carnival. Maybe that's why most folks here don't flinch at the news that schools are closing Monday regardless of the outcome Sunday night so that students can stay up late to watch the game and take part in a piece of history. Or why the courts will be closed, too -- hey, what judge would be able to find a sober jury?

And win or lose, the city is throwing a team parade through downtown New Orleans on Tuesday. Win or lose. And it shouldn't be any other way in a city where as many tears were shed as beers were drunk less than two weeks ago. Heck, New Orleans is such a Saints-crazy town that the Saints drew an unprecedented 82 market share for the NFC Championship Game versus the Vikings. That means that 82 percent of televisions in operation were tuned to the game, and it even reached 86 percent when Hartley made his now-legendary field goal in overtime.

One of the important things to remember about the link between this city and our team is that anyone who lives in New Orleans now actually had to make the conscious decision to move back or move in; everyone was displaced for some period of time following Hurricane Katrina. And that included the New Orleans Saints. Many of us assumed incorrectly that the team would be headed elsewhere, but maybe the Saints and New Orleans were just meant to be (thanks in part to former NFL commissioner Paul Tagliabue).

This Saints season has been important to the city for a number of reasons, perhaps the most important being that it gives New Orleanians another opportunity to showcase what's been going on and where we're headed as a city. There was real worry about "Katrina fatigue." The Saints have given us another chance to highlight the progress we've made the and work left to be done.

It's not just politics as usual. New Orleans is on the rebound.

These are exciting times in the Big Easy. New Orleans is nearing 80 percent of its pre-Katrina population. It's likely that a new mayor will be elected Saturday, giving a fresh face to a once-tarnished local government. There is some truth to the notion that the Saints have brought racial tension in the city to what seems an all-time low. The local economy is bearing the recession better than in any city New Orleans' size. And oh yeah, New Orleans is in the Super Bowl. If New Orleanians hope for anything other than a win, it's that maybe you remember why New Orleans was so important to the fabric of our country and why you cheer for underdogs and comebacks.

It's not too late to become a member of The Who Dat Nation or an honorary citizen of New Orleans. It's really one and the same. We're a church of converts. You might not get in the first pew, but you get in. You've just got to believe. Believe that you can be down on your luck but still come back. There's an important message to the youth of the country that could shape a whole generation of people.

This is not just a game, and there is a larger story to be told about a franchise and a city that are now synonymous with one another. Regardless of the outcome, this has been a big win for all New Orleanians. Go Saints! Go New Orleans! Who dat!
Posted by Padre Steve at 9:19 PM