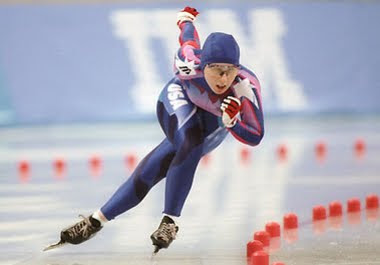 This is an amazing Olympic story and a story of faith! It comes from the Yahoo Sports page:

Twelve years ago at the Winter Olympics in Nagano, a 17-year-old speedskating prodigy named Kirstin Holum was tapped for future greatness.

When Holum placed sixth in the 3,000 meters – one of the most grueling disciplines in the women’s program, a lung-scraping four-minute bust of lactic acid torture – speedskating insiders predicted a golden future and speculated she may not even reach her peak for another decade.

Like many of the longer distances, the 3,000 is regularly dominated by older athletes, as it can take years to build up the requisite reserves of aerobic capacity and deep-tissue resilience. At Nagano, 32-year-old Gunda Niemann-Stirnemann of Germany claimed the gold.

Holum was born into speedskating royalty. Her mother Dianne was a world-class speedskater who won Olympic gold in 1972 and reached even greater heights as a coach, mentoring the legendary Eric Heiden to his clean sweep at Lake Placid in 1980.

Despite an ongoing battle with exercise-induced asthma, Holum was a champion waiting to happen. Instead, Nagano would signal the final time she would pull on a pair of skates with competitive intent.

From that point on, her life began an entirely different journey.

“Speedskating was such a huge part of my life,” Holumn said in a telephone interview with Yahoo! Sports. “I still loved the sport, but I had this incredibly strong calling that it was time to move on and take a different path in life.”

There is no television and no internet at St. Joseph’s Convent in Leeds, England, meaning Holum won’t get to watch the Winter Olympics where she was supposed to become a star.

The peaceful surrounds of the convent is where Holum, now known as Sister Catherine, devotes her life to religious service as a Franciscan nun. That calling had begun on a trip to Our Lady of Fatima, a holy site in Portugal famed for a series of religious visions that appeared nearly a century ago. It was outside the Fatima basilica where Holum decided that a path of religious dedication, not frozen skating lanes, would be her destiny. 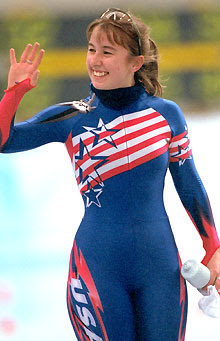 “It is funny now to think of how different my life is now,” she said. “I had the wonderful privilege of being able to compete as an Olympian, and now I am blessed to able to serve God and help those less fortunate.”

After completing an art degree, including a thesis on the Olympics at the Art Institute of Chicago, Holum joined the Franciscan Sisters of the Renewal, a faith with a mission “to work with the poor and homeless and evangelization.”

Based first in New York, Sister Catherine and her fellow nuns stepped on to the mean streets of the Bronx to work with some of the Big Apple’s most underprivileged children in areas steeped in gang culture. Such work and sacrifice in homeless shelters and soup kitchens gave her a deep-rooted sense of satisfaction that skating had never been able to provide.

She attacked each new project with the tenacity of an Olympian, and, according to Sister Lucille, who leads operations at the order’s Bronx chapter, the “compassion of an angel.”

“It is wonderful to see people’s faces light up when Sister Catherine shares her experiences of her time in speedskating,” Sister Lucille said. “She never boasts about it but she has come to realize that we are incredibly proud of her and are lucky to have her as part of our religious family. The sisters and the people we try to reach love hearing about what she accomplished.”

Last year, missionary work took Sister Catherine to England, where she has found her previous life as an athlete a useful tool in providing some “street cred” when dealing with skeptical youngsters.

“When I give my religious testimonies, it is fun to watch the reaction of the kids when I tell them I was in the Olympics,” she laughed. “Their eyes get really big and they start paying a lot more attention. It is a great thing to share with them and it gives me a lot of pleasure to think back and talk about it.

“It is not exactly something you would normally expect from a sister. But I think it is good for people to see that members of the religious order can come from any background and any walk of life. It is all about your commitment to the message.

“It brings back so many memories and it is such a long time ago it sometimes feels like it happened to someone else. Skating was part of who I was for such a long time but having something to look ahead to made things very clear.”

Despite her time away, the speedskating world has not forgotten Kirstin Holum. Shani Davis and Tucker Fredricks, both chasing gold for the United States here in Vancouver, grew up skating with her in junior competitions and asked to be remembered to her.

“I wish them all the very best too and I will be thinking of them when they compete,” said Sister Catherine. “There is not really much opportunity for me to follow how things go but my thoughts and prayers are with them.

Hat tip to the Deacon's Bench!
Posted by Padre Steve at 9:59 AM