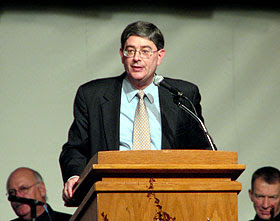 In a talk delivered today in Paris, noted author George Weigel discussed the evangelization of the European culture and offered his advice on how to spark a renewal. Pointing to the “demographic winter” gripping much of the continent, Weigel described it as a portent of the future, unless Europeans insist on the place of Christian values in society and combat relativism with truth.

Weigel gave his speech at the Lustiger Symposium at the Collèges des Bernardins in Paris through a pre-recorded video.

Opening his address with a reflection on the writings of the late Pope John Paul II, Weigel discussed the 2003 encyclical, “Ecclesia in Europa,” calling it “a papal report card” on modern Europe, which showed “mixed grades.”

Of the greatest concern to the late Pontiff, said Weigel, was the lack of hope he saw in modern European culture as demonstrated by its failure to create “successor generations.”

Weigel noted that “while Europe’s demographic winter was undoubtedly the result of a complex of causes, something was clearly awry in the realm of the human spirit when an entire continent – wealthier, healthier, and more secure than ever before – was depopulating itself, not because of war, natural disaster, or plague, but by its own will.”

Pointing out that the last century was one of the the bloodiest in Europe's history, Weigel quoted Cardinal Jean Marie Lustiger to say that a collective post-war “guilt” still hangs over Europe.

“Here, Lustiger had in mind 'the proclamation of freedom [which] became the will to dominate…the pursuit of equality [which] produced slavery,' and 'the affirmation of brotherhood [which] became the origin of bloody struggles and of hopeless divisions,'” the American scholar said.

Accoring to Weigel, Cardinal Lustiger described that guilt in a 1981 address to the diplomatic corps in Bonn, saying, “as if exhausted by violence, Europe is hardly capable of transmitting life to new generations; poor, wounded Europe is causing the springs of life to run dry. The fruitfulness of love is under attack and the fruits of love are being aborted.”

In addition to Lustiger, Weigel noted that John Paul II also wrote on the “soul-withering effects” of post-war European guilt, which he attributed to Europeans betraying the values that were inspired in their culture by Christianity.

If there is no God, said John Paul II, Europeans “have no one from whom they can seek forgiveness.”

This hopelessness, said Weigel, has transformed into a “nihilism” and an “aggressive secularism” within European culture and has resulted in what then-Cardinal Ratzinger has called a “dictatorship of relativism.”

Europe, by extension, effects the whole of the West, argued Weigel. The importance of its evangelization, therefore, cannot be overstated. Drawing from the writings of both Jean Marie Lustiger and Pope John Paul II, he spoke on the hope for the renewal of Christian culture in Europe and presented what he called his fine-tuning of a “culture-first” strategy.

The first step in the process of Christian renewal, the Catholic author said, is that “intolerance in the name of 'tolerance' must be named for what it is and publicly condemned.” According to Weigel, Biblical morality is being treated in European culture with “bigotry and intolerance” and this is an “uncivil act that must be named as such.” But the prime example of this intolerance is the European Union and individual states believing that they have the authority to redefine marriage – a human institution that “antedates the state ontologically as well as historically,” he said.

Secondly, Weigel argued that Catholic Christians must speak openly “about the empirically demonstrable and deplorable effects of the sexual revolution on individuals and society.” In addition to this, he argued that Catholics need to bring about a “new appreciation of the dignity and nobility of human love” as illustrated in John Paul II's “Theology of the Body.”

“This weapon in the conversion of culture ought to be fully and unapologetically deployed,” Weigel argued, “and if that requires making the public claim that the Catholic Church understands human sexuality better than the prophets of sexual liberation, then so be it.”

The American intellectual also asserted that the Church needs to be vindicated from the “black legends” that circulate around its history, such as the Crusades, Galileo's trial and the Inquisition.

“I raise these matters of historical record, not to score debating points,” Weigel clarified, “but to suggest that part of the challenge we face today is to recognize, with John Paul II and Cardinal Lustiger, that Europe (and indeed the entire West) is suffering from a false story about itself, and about the relationship of biblical religion to its formation and its history.”

Finally, Weigel advised, the Church must continue to develop a “rich interior life,” and at the same time, find “winsome ways to make the Church's proposal to a post-Christian Europe.” One way to do this, he suggested, is for members of the Church to join with men and women “of conscience,” who may not be believers, to publicly challenge “the ever-more-ominous dictatorship of relativism.”

Speaking to the Europeans in attendance at the Collèges des Bernardins symposium, Weigel concluded by saying, “I commend that more combative stance to you, who stand watch over the societies that gave birth to my own, in contesting for the causes we share.”