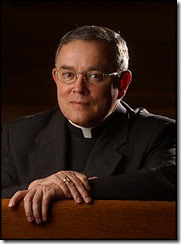 If you were wondering what Archbishop Chaput had to say on the Notre Dame mess here it is from the Archdiocese of Denver site:

Most graduation speeches are a mix of piety and optimism designed to ease students smoothly into real life. The best have humor. Some genuinely inspire. But only a rare few manage to be pious, optimistic, evasive, sad and damaging all at the same time. Father John Jenkins, C.S.C., Notre Dame’s president, is a man of substantial intellect and ability. This makes his introductory comments to President Obama’s Notre Dame commencement speech on May 17 all the more embarrassing.

Let’s remember that the debate over President Obama’s appearance at Notre Dame was never about whether he is a good or bad man. The president is clearly a sincere and able man. By his own words, religion has had a major influence in his life. We owe him the respect Scripture calls us to show all public officials. We have a duty to pray for his wisdom and for the success of his service to the common good -- insofar as it is guided by right moral reasoning.

We also have the duty to oppose him when he’s wrong on foundational issues like abortion, embryonic stem cell research and similar matters. And we also have the duty to avoid prostituting our Catholic identity by appeals to phony dialogue that mask an abdication of our moral witness. Notre Dame did not merely invite the president to speak at its commencement. It also conferred an unnecessary and unearned honorary law degree on a man committed to upholding one of the worst Supreme Court decisions in our nation’s history: Roe v. Wade.

In doing so, Notre Dame ignored the U.S. bishops’ guidance in their 2004 statement, Catholics in Political Life. It ignored the concerns of Ambassador Mary Ann Glendon, Notre Dame’s 2009 Laetare Medal honoree – who, unlike the president, certainly did deserve her award, but finally declined it in frustration with the university’s action. It ignored appeals from the university’s local bishop, the president of the U.S. Catholic bishops’ conference, more than 70 other bishops, many thousands of Notre Dame alumni and hundreds of thousands of other American Catholics. Even here in Colorado, I’ve heard from too many to count.

There was no excuse – none, except intellectual vanity – for the university to persist in its course. And Father Jenkins compounded a bad original decision with evasive and disingenuous explanations to subsequently justify it.

These are hard words, but they’re deserved precisely because of Father Jenkins’ own remarks on May 17: Until now, American Catholics have indeed had “a special expectation, a special hope for what Notre Dame can accomplish in the world.” For many faithful Catholics – and not just a “small but vocal group” described with such inexcusable disdain and ignorance in journals like Time magazine -- that changed Sunday.

The May 17 events do have some fitting irony, though. Almost exactly 25 years ago, Notre Dame provided the forum for Gov. Mario Cuomo to outline the “Catholic” case for “pro-choice” public service. At the time, Cuomo’s speech was hailed in the media as a masterpiece of American Catholic legal and moral reasoning. In retrospect, it’s clearly adroit. It’s also, just as clearly, an illogical and intellectually shabby exercise in the manufacture of excuses. Father Jenkins’ explanations, and President Obama’s honorary degree, are a fitting national bookend to a quarter century of softening Catholic witness in Catholic higher education. Together, they’ve given the next generation of Catholic leadership all the excuses they need to baptize their personal conveniences and ignore what it really demands to be “Catholic” in the public square.

Chicago’s Cardinal Francis George has suggested that Notre Dame “didn’t understand” what it means to be Catholic before these events began. He's correct, and Notre Dame is hardly alone in its institutional confusion. That's the heart of the matter. Notre Dame’s leadership has done a real disservice to the Church, and now seeks to ride out the criticism by treating it as an expression of fringe anger. But the damage remains, and Notre Dame’s critics are right. The most vital thing faithful Catholics can do now is to insist – by their words, actions and financial support – that institutions claiming to be “Catholic” actually live the faith with courage and consistency. If that happens, Notre Dame’s failure may yet do some unintended good.
Posted by Padre Steve at 8:55 AM