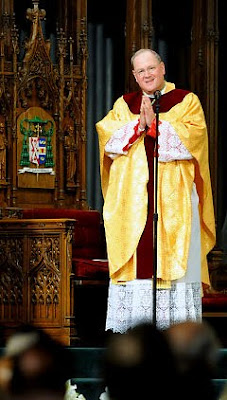 The following come from the CNA via Roman Catholic Vocations:
New York Archbishop Timothy Dolan, keynote speaker at the 67th Serra International Convention in Omaha, Neb., said the lay faithful of the church have a duty to nurture vocations to the priesthood.

The archbishop is the episcopal adviser to the Serra Club, an international organization that promotes and fosters vocations to the priesthood and consecrated life. He was one of several speakers at the convention held at Omaha’s Qwest Center and attended by more than 500 people.

Archbishop Dolan said one way to start promoting religious vocations is to begin with emphasizing the vocation of marriage and family.

“Only 50 percent of our Catholic young people are approaching the sacrament of matrimony,” he said. “Vocations to the priesthood and religious life come from vocations to lifelong, life-giving and faithful marriages.”

“There is a climate of fear, suspicion and discouragement when it comes to vocations to the priesthood and consecrated religious life,” he said. “Many boys or young men are afraid to publicly say, ‘I want to be a priest.’”

During the late 1980s, Archbishop Dolan said, only 51 percent of Catholic parents said they would be happy if their son wanted to be a priest. Today, however, he believes that perception is changing because of Serra International and other similar groups.

Serra International has more than 1,100 Serra clubs in 46 countries. Thirteen of those countries, including the U.S., were represented at the convention.

Serra International’s president, Cesare Gambardella of Italy, said the greatest trait of Serra is its internationality and its ties with the clubs of the world.

Some of those attending the convention said they like to take advantage of those connections.

Reaching out to youth

Patrick Ugbana, president of the Serra Club of Lagos in Nigeria, said he is inspired by the work of his fellow Serrans and noted that their work inspired him to attend the convention.

He said eight new Serra clubs are forming in Nigeria and half of the members are under 35.

“We want more young people to join,” he told the Catholic Voice, newspaper of the Omaha Archdiocese. “But I also want my older members to serve as long as possible because service to God never ends.”

Thomas Wong, a member of the Serra Club of Hong Kong for 15 years, said his club of 40 members is beginning to get some young people to join.

“The energy and enthusiasm of these young members will make our club stronger,” he said.
Posted by Padre Steve at 2:43 PM