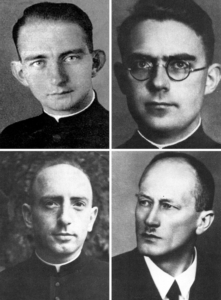 The following comes from the CNS via the Boston Pilot:

As the Nazi executioner beheaded three Catholic priests and a Lutheran pastor, one after another in a matter of minutes, their blood flowed together, creating a powerful symbol for ecumenism in northern Germany.

On June 25, the three Catholic martyrs of Lubeck -- Fathers Johannes Prassek, Eduard Muller and Hermann Lange -- will be beatified in the historic city's Sacred Heart Church, a stone's throw away from the Lubeck Cathedral, the ministerial home of the Rev. Karl Friedrich Stellbrink, their Lutheran counterpart. Rev. Stellbrink will be honored in a special way that day as well.

The four were executed in Hamburg Nov. 10, 1943. All had been found guilty of disseminating anti-Nazi material -- such as the homilies of Cardinal Clemens von Galen of Munster -- and other "treasonous" activities.

Although they were just four of more than 1,600 victims of Nazi political executions that year, their case drew the particular attention of Adolf Hitler and propaganda minister Joseph Goebbels. Hitler reportedly intervened personally in the case of the four clerics, formulating the charges and instructing prosecutors on their strategy.

After the four were sentenced to death June 23, 1943, in a trial widely considered a farce, Goebbels wrote in his diary: "I urge that the death sentences will in fact be carried out." An appeal for clemency by Catholic Bishop Hermann Berning of Osnabruck was rejected.

Father Franz Mecklenfeld of Sacred Heart Church told Catholic News Service that news of the beatification was received with "immense joy" by his parishioners.

It also is being followed "with great interest in the city of Lubeck," traditionally a Lutheran stronghold. In September, the daily Lubecker Nachrichten published a series of articles on the lives of the four martyrs.

"The martyrs have a great significance for the city," Father Mecklenfeld said. "They have become 'shining towers' in the city of Lubeck," where the skyline is famous for its seven Gothic church spires.

The notion of beatifying the three Catholics when their Lutheran companion cannot be honored in the same way has given rise to some controversy. The Rev. Heinz Russmann, a Lutheran pastor in Lubeck, wrote that the beatification would represent a painful division that would be harmful to ecumenism.

Either all four should be beatified, or none, he wrote.

His view is shared by the conservative local politician Hans-Lothar Fauth, a Catholic, who has said that all four have long been publicly acclaimed as saints, regardless of denomination, and therefore require no official recognition.

Father Mecklenfeld said his parish always has been sensitive about maintaining the ties among all four martyrs.

Ecumenical relations in Lubeck are marked by the shared martyrdom. Pope Benedict XVI, a German, has recognized the significance of that friendship.

In an address to the German ambassador to the Vatican Sept. 13, he said the friendship among the clerics while in jail "represents an impressive witness to ecumenical prayer and suffering which in many places flowered among Christians of different denominations during the dark days of national socialism. We may regard these witnesses as shining lights on our common ecumenical path."

Father Lange's writings bear out the pope's sentiment. In a July 1943 letter, he wrote: "The suffering borne in common over the last years has brought the two Christian churches closer to one another. The shared imprisonment of the Catholic and the evangelical (Lutheran) clergy is a symbol of this community of suffering, but also of reconciliation."
Posted by Padre Steve at 8:25 AM