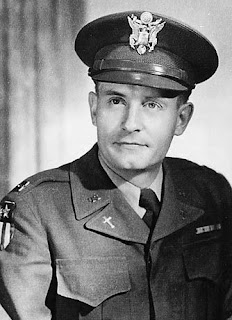 
U.S. Army chaplain Fr. Emil Kapaun’s cause for beatification is headed to Rome, an event the Diocese of Wichita celebrated with a July 1 Mass at the Cathedral of the Immaculate Conception.

Fr. John Hotze, episcopal delegate for the office of Fr. Kapaun’s beatification and canonization, said the event marks the culmination of years of work and also celebrates the “gift” of Fr. Kapaun.

“The fact that we, unlike any other diocese in the United States, in the world, have been blessed by the example of this saintly man, Father Emil Kapaun, boggles my mind,” he said in a June 30 statement. “How can we do anything less than give praise to God for this gift and strive to follow the example of Father Kapaun’s selfless giving.”
Fr. Kapaun, a native of Pilsen, Kansas, served in the Korean War. He courageously rescued wounded soldiers from the battlefield, risking his own life to prevent their execution at the hands of the Chinese.

He was captured by North Korean and Communist Chinese forces after he volunteered to stay behind on a battlefield with the injured.

The priest’s service to his fellow prisoners has become legendary among those who knew of him. Scores of men attributed their survival to his work tending the starving and the sick.
Fr. Kapaun died in a prison camp hospital on May 23, 1951. The Diocese of Wichita has investigated his life since 2001 and officially opened the cause for his beatification on June 29, 2008.

Andrea Ambrosi, a lawyer investigating the case for the Vatican, told the Wichita Eagle he thinks Fr. Kapaun has a good chance to be raised to the altars.

“He showed that there was not just a devil working on the battlefields of the war, but something else.”

The investigator said Kapaun’s candidacy is unique compared with the hundreds of other cases he has investigated because it is so full of action and detailed. While most cases involve “very holy” priests and nuns who have miracles attributed to them, Fr. Kapaun’s story involves far more deeds of heroism, sacrifice and action.

In 2006 Avery Gerleman, then 12 years-old, was near death for 87 days. She recovered after her parents prayed to Kapaun.

In October 2008 Chase Kear, a college track athlete, inexplicably survived a severe pole vaulting accident. His skull was fractured from ear to ear and caused some bleeding on his brain. Doctors said he would likely either die in surgery or from a post-surgery infection.
However, family and friends joined in petitions to Fr. Kapaun. Kear survived the surgery and left the hospital only a few days after the incident.

Ambrosi said the intensity of the priest’s devotees is “incredible.”

Several Catholic parishes and many parishioners pray for Fr. Kapaun’s intercession every week at Masses and many call upon him when loved ones become ill.

Fr. Hotze said that the diocese has finished collecting information that will “hopefully, with the grace of God, prove Father Kapaun worthy of beatification and then canonization as a saint of the Catholic Church.”

Ambrosi and other investigators must now closely study 8,268 documents about the chaplain’s deeds and sacrifices in the Korean War. Those documents are being sent to Rome.

If canonized, the priest would become the third American-born saint.
Posted by Padre Steve at 9:39 AM