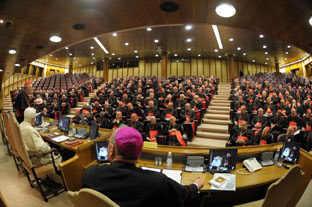 Pope Benedict XVI has formally opened the Synod of Bishops on the New Evangelization with a “universal call to holiness” aimed at all Christians worldwide.

“Holy men and women bloom among the generous missionaries who announce the Good News to non-Christians, in the past in mission countries and now in any place where there are non-Christians,” said the Pontiff in his homily during Mass in St. Peter’s Square Oct. 7.

“Holiness is not confined by cultural, social, political or religious barriers. Its language, that of love and truth, is understandable to all people of good will and it draws them to Jesus Christ, the inexhaustible source of new life.”

Over the next three weeks the Synod of Bishops will aim to map out a new evangelization of the contemporary world. The Pope explained that the particular focus of “new” evangelization are those people “who, though baptized, have drifted away from the Church and live without reference to the Christian life.”

“The Synodal Assembly which opens today is dedicated to this new evangelization, to help these people encounter the Lord, who alone who fills existence with deep meaning and peace,” he said. He added that a rediscovery of the Christian faith can be a “source of grace which brings joy and hope to personal, family and social life” to the re-evangelized.

Wearing green vestments, the vast majority of the 262 Synod Fathers joined Pope Benedict in St. Peter’s Square to con-celebrate Mass. The Pontiff advised them that the synod session should be focused on “the glorious One who was crucified.”

“In every time and place, evangelization always has as its starting and finishing points Jesus Christ, the Son of God,” he told them. He identified the crucifix as “the supremely distinctive sign of him who announces the Gospel: a sign of love and peace, a call to conversion and reconciliation.”

“My dear Brother Bishops,” he said, “starting with ourselves, let us fix our gaze upon him and let us be purified by his grace.”

The Pope reflected upon the Sunday gospel in which Jesus proclaimed the indissolubility of marriage: “what therefore God has joined together, let not man put asunder.” Pope Benedict recognized that “unfortunately, for various reasons, marriage, in precisely the oldest regions evangelized, is going through a profound crisis.”

He called upon the Synod of Bishops to focus make marriage “not only an object but a subject of the new evangelization” suggesting that there is “a clear link between the crisis in faith and the crisis in marriage.”

“Marriage is linked to faith, but not in a general way,” he said. Marriage “as a union of faithful and indissoluble love” is “based upon the grace that comes from the triune God, who in Christ loved us with a faithful love, even to the Cross.”

He advised that this statement be understood “in contrast to the painful reality of many marriages which, unhappily, end badly.”

In conclusion, Pope Benedict placed the Synod of Bishops under the protection of the saints, particularly Bl. John Paul II “whose long pontificate was an example of the new evangelization” and “the Blessed Virgin Mary, Star of the New Evangelization.”

“With her let us invoke a new outpouring of the Holy Spirit, that from on high he may illumine the synodal assembly and make it fruitful for the Church’s way ahead.”
Posted by Padre Steve at 10:55 AM