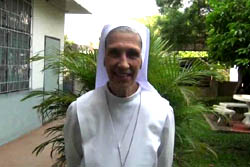 (ANS – Rome) – Sr Ana Rosa Sivori, Argentinian, and Salesian Sister (fma) a missionary in Thailand, is a second degree cousin of Jorge Mario Bergoglio, the newly elected Pope Francis. She was invited to Rome for the inaugural Mass of the new Pontificate. In what follows we report an excerpt from the interview which the Sisters in Thailand published on the Institute's website.

What were your emotions when you learned that the new Pope was Cardinal Bergoglio?I felt very emotional because I did not expect it, I had not considered that the Lord would choose him, knowing how reluctant he is to putting himself forward. But I thanked the Lord for the Pope he has given us and prayed for him, since he has taken up such a huge cross.

What kind of relationship so you have with him; what are your memories?We are second degree cousins. His and my maternal grandfathers were brothers, so my mother and his father were first degree cousins and that makes us second degree ones. He was very fond of my father and caught up with him whenever he could. The last time I saw him was last year. I returned home to visit my family and went to see him, as I always do when returning to Argentina. We chatted for a while and he gave me some books for myself and the Sisters, and asked me to pray for him as he always does. He always used say: “Ana Rosa, pray for me; do remember to pray for me”.

How would you describe the new Pope?It is not so simple to describe him,  but briefly, when I think of him I think of austerity, simplicity, humility. He is a very humble person, very reluctant to be in the limelight. He has always lived poorly. Even as a Cardinal he used public transport and lived in a poor and simple dwelling.

What about his service to the Church up till now?It is many years since I have lived in Argentina, but what I can say is that he always worked for the poor, the marginalised. He always thought of the elderly, children, those who have less of a voice in society; he always did a lot for them.

In your view how will his election be important for Argentina as a nation?Argentina has been going through a crisis for some time. His election has filled Argentinians with joy and hope. They are very happy at his election and see God's hand in it; they can see a revival of Christianity in the future in a nation that is suffering.

What is your wish for the new Pope?He needs the light of the Holy Spirit to be able to do the good he intends to do for the Church and the world. He is speaking much of brotherhood in the Church and the whole world, so for Pope Francis I ask the Lord to enlighten and guide him in his mission in the best way possible. Let us continue to accompany him with our prayer
On the FMA website you can see the complete video of the interview.
Posted by Padre Steve at 5:00 AM