The Salesian Who Baptized Jorge Bergoglio 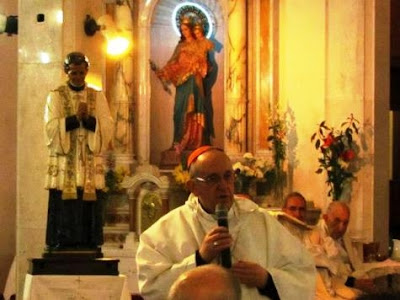 (CNA) The Italian daily Il Cittadino has unearthed the story of Father Enrico Pozzoli, a Salesian missionary from the province of Lodi who baptized young Jorge Mario Bergoglio, who is today Pope Francis.

The newspaper published an account of various episodes in the life of Bergoglio, including his baptism, which occurred on Christmas night at the Basilica of Mary Help of Christians and Saint Carlos in Buenos Aires.

According to Il Cittadino, Father Pozzoli was a “very important figure and model of priestly life” for Pope Francis, so much so that in 1982, the future Pontiff remembered him in the prologue for his “Meditations for Religious” as “an example of ecclesial service and religious consecration,” underscoring “the great influence he had on his life.”

In a letter he wrote on October 20, 1990, to Salesian Father Cayetano Bruno, Pope Francis explained his relationship with the missionary priest: “Today is the 29th anniversary of the death of Father Enrico Pozzoli, and I just celebrated Mass for the priest who baptized me on December 25, 1936.”

Father Pozzoli lived in Argentina from 1906 until his death in 1961.  He was born in 1880 in Senna Lodigiana, an Italian town near the Po River. He left Italy as a young priest to work in South America.

“He would have never imagined that among the faithful entrusted to his care there would have been a future Pope as well and that his seed would have born such illustrious fruit. Not only did he bring forth the faith in the future Pope Francis, but he also accompanied him as he grew as a Christian and was his spiritual father until he reached the age of 17, when his priestly vocation blossomed,” Il Cittadino reported.

Father Pozzoli would send letters to his nieces and nephews in Italy, explaining his daily life with Italian immigrants in Argentina. He also sent pictures of Buenos Aires and Tierra del Fuego, noting on the back how many kilometers he went on each trip.

In addition, he cared for the health of young Bergoglio and was the one to encourage him to travel to the mountains south of Buenos Aires to recover from a serious respiratory infection that left him with only one working lung.

Hat Tip to Deacon Greg!
Posted by Padre Steve at 11:00 AM