Remembering Our Lady of Lourdes!

The following comes from the Women for Faith and Family site: 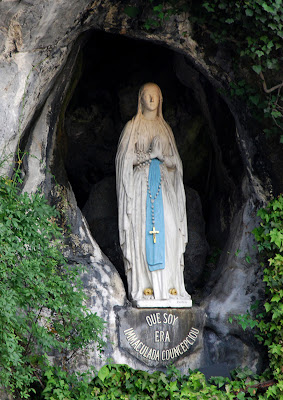 The Shrine of Our Lady of Lourdes in southern France is the most visited pilgrimage site in the world -- principally because of the apparent healing properties of the waters of the spring that appeared during the apparitions of the Blessed Virgin Mary to a poor, fourteen-year-old girl, Bernadette Soubiroux.

The first apparition occurred February 11, 1858. There were eighteen in all; the last took place July 16, of the same year. Bernadette often fell into an ecstasy during these apparitions, as was witnessed by the hundreds who attended the later visions, though no one except Bernadette ever saw or heard the apparition.

The mysterious vision Bernadette saw in the hollow of the rock Massabielle, where she and friends had gone to gather firewood, was that of a young and beautiful lady. "Lovelier than I have ever seen" said the child. She described the Lady as clothed in white, with a blue ribbon sash and a Rosary handing from her right arm. Now and then the apparition spoke to Bernadette.

One day, the Lady told the girl to drink of a mysterious fountain within the grotto itself, the existence of which was unknown, and of which there was no sign. But Bernadette scratched at the ground, and a spring immediately bubbled up and soon gushed forth. On another occasion the apparition bade Bernadette go and tell the priests she wished a chapel to be built on the spot and processions to be made to the grotto. At first the clergy were incredulous. The priest said he would not believe it unless the apparition gave Bernadette her name. After another apparition, Bernadette reported that the Lady told her, "I am the Immaculate Conception". Though the girl was unfamiliar with the term, the Pope had declared the doctrine of the immaculate conception of the Virgin Mary in 1854.

Four years after Bernadette's visions, in 1862, the bishop of the diocese declared the faithful "justified in believing the reality of the apparition" of Our Lady. A basilica was built upon the rock of Massabielle by M. Peyramale, the parish priest. In 1873 the great "national" French pilgrimages were inaugurated. Three years later the basilica was consecrated and the statue solemnly crowned. In 1883 the foundation stone of another church was laid, as the first was no longer large enough. It was built at the foot of the basilica and was consecrated in 1901 and called the Church of the Rosary. Pope Leo XIII authorized a special office and a Mass, in commemoration of the apparition, and in 1907 Pius X extended the observance of this feast to the entire Church; it is now observed on February 11.
Posted by Padre Steve at 5:00 AM