The Mysticism of St. Ignatius of Antioch 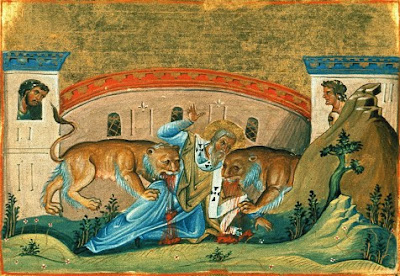 The following comes from the Catholic Exchange:
Some time around 117 AD, if you had been able to survey the hundreds of miles of Roman roads leading from Syrian Antioch (in what is now southeast Turkey) to Rome, many strange sights would have greeted you. But one of the strangest would have been a detail of ten sullen guards leading an aged prisoner.

By willingly facing and even desiring martyrdom, Ignatius revealed that his spirituality was marked by the notion of sacrificial offering. Ignatius saw his impending martyrdom as united to Christ’s offering on Calvary and hence as participating in the redemptive efficacy of the Cross. Jesus’ Passion certainly bore sufficient fruit for the redemption of the whole world. Yet in raising Christians to the dignity of sons and daughters, the Father has granted them the privilege of sharing in His work by applying these fruits toward their own salvation and the salvation of others. Participation in Christ’s sacrifice is wholly by grace and is itself a fruit of the Passion, so that there remains an infinite gulf between the work of Christ and those who share in it. Nevertheless, their participation is real and mysteriously efficacious.
Referring to the vine and the branches, Ignatius proposed the image of the tree of the Cross and its branches. He considered those who are planted by the Father as “branches of the Cross, and their fruit [as] imperishable — the same Cross by which He, through His suffering, calls you who are His members” (Trallians 11.2). Not only can we bear fruit in others’ lives by our material assistance, evangelism, and prayers, but our sufferings can also be offered in union with Christ for the sake of others. Ignatius wrote to the Ephesians, “I am a humble sacrifice for you and I dedicate myself to you Ephesians” (8.1).
Once again, the Eucharist was at the heart of Ignatius’s thinking. He implored the Church of Rome: “Grant me nothing more than to be poured out as an offering to God while there is still an altar ready, so that in love you may form a chorus and sing to the Father in Jesus Christ” (2.2). The reference to the altar and singing chorus seems to be a conscious allusion to the early Mass. Because the Mass truly makes Christ’s sacrifice present on the altar under the appearance of bread and wine, the Christian can unite his own sufferings to Christ’s in the offering of the Mass. Ignatius encouraged the Church of Rome to see his death as a sacrifice of praise to the Father in Jesus: like the offering of the Mass, they ought to respond with song.
Posted by Padre Steve at 10:00 AM