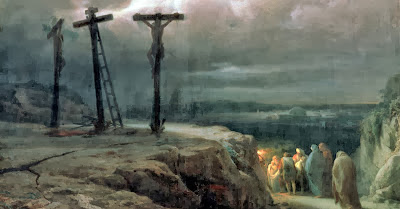 The following comes from Heather King:

"We must all be saved together! Reach God together! Appear before Him together! We must return to our Father’s house together…what would He think if we arrived without the others, without the others returning, too?"
--Charles PéguyRecently  a reader sent a link to a piece by a disgruntled lapsed Catholic who was marching about fuming that no mere Pope Francis would induce him to re-join the Church. " 'God is love, God is love,'" he groused. That's the namby-pamby message I hear. I want something challenging. I want to hear about sacrifice. He approvingly quoted Flannery O'Connor: "They think faith is a big electric blanket, when of course it is the cross."This guy so does not get what Flannery, with her huge sense of humor, and profound love of Christ, got from Day One: the Church IS the Cross. If you want to be challenged (and ridiculed, and marginalized, and scorned), do major penance and sacrifice, and die to every idea you've ever had about who you are, who God is, and what religion is, become a member of the Catholic church."When you finally discover that you are just one of the little people, don’t conclude that this makes you special," observed French eccentric/lay comic-mystic/lover of the poor Madeleine Delbrêl.

The idea isn't to demand that the Church make herself worthy of us. The idea is to realize that in spite of our unworthiness, we--miracle upon grace upon wonder upon mystery--have been deemed worthy of the Church. "Lord, I am not worthy that you should enter under my roof, but only say the word and my soul shall be healed," we pray, just before receiving the Eucharist. The Eucharist! The Body and Blood of the Savior of the World. I mean this joker thinks Christ is not worthy of him?!

Here's the Cross of the Church: It's not just for us. It's for everybody. Thus, we don't get to have homilies tailor-made for us, although in another way a homily always is tailor-made, usually in the last way we would have chosen. The priest has to meet the tentative searcher; the elderly man who has tottered in, aching in every bone in his body, to give thanks; the pregnant teenager; the wife of the CEO whose son is a crackhead dying out on the streets; the crackhead; the guy who's cheating on his wife; the wife; the vet suffering from PTSD; the general who's ordered the killing; the nurse trying to figure out whether to quit her job because her hospital is performing abortions.

The priest has to do that while performing baptisms, weddings, funerals; while overseeing the fundraising fall festival; while settling parish conflicts; while blessing homes, cars, and candles.  He has to do this, day after day, often many times a day, while exhausted, understaffed, impatient, critical and doubtful (i.e. human) himself. He doesn't get to have it his way, all the time, any more than any of us do.

It is one of the glories and gifts of the Church that we don't encourage priests who are "personalities." We don't encourage flamboyancy. We encourage humility, plodding perseverance, and service. So perhaps the priest can be forgiven for resorting to saying that God is love, not least of all because God IS love--just not the love, ever, that we think. Actually, in seventeen years in the Church, I have never once heard a priest say "God is love." I've heard priests say our job is to serve the poor, examine our faults, love God. I've heard a steady stream of Gospel-based homilies that, if not individually wildly compelling, have consistently, slowly, quietly, inexorably led me closer to Christ.

In seventeen years, I can also count on one hand the number of times a priest, while celebrating Mass, has appeared surly, bored, condescending, or irreverent. This quiet, faithful carrying out of the duties of the office, no matter how disordered the priest may be personally, has set me free to ponder the great mystery and sacrifice of the Mass, to penetrate beneath the surface, to realize that, as Flannery O'Connor observed, the Mass could be celebrated out of a suitcase in a furnace room and it would still be the Mass: the most shocking, scandalous, cataclysmic, glorious, horrifying, sublime act the world ever has or ever could know. After awhile I realized, Let me bring my burning heart. Let me make up for what is lacking in the suffering of Christ. Instead of sitting around complaining and carping, maybe I could think about what I could contribute to the Church.

People erroneously think the Church is confining, but the Church gives us the framework of prayer, the Gospels, the Catechism, the community, and the Sacraments and then you are more or less on your own, man. You will be surprised to find that the Church trusts that--given your intelligence, good will, and humble, contrite heart--you will be able to connect the dots. And the dots are these: You don't get to have someone hold your hand and guide you along the perilous, excruciatingly lonely path to Christ. You don't get to have someone applaud or even notice your hidden life of sacrifice and penance. You don't get to be understood, validated, and comforted every other minute. While you're being nailed to your own Cross, you get to do those things for someone else.

You will see that the Church is both the lightest yoke and the heaviest cross imaginable. You will begin to understand the meaning of the Sermon on the Mount. You will see that the biggest electric blanket of all is the desire for spiritual excellence, an Ivy League college, a high-end gym with a personal trainer; for others to view our journey to God as interesting, as special, as just a bit of a cut above the ordinary.

Please, read the rest here.
Posted by Padre Steve at 5:00 AM