Saint of the day: Joseph Cafasso 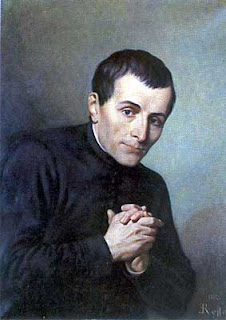 The following comes from the Salesian News Agency:
From the same village as Don Bosco, he was the third of four children. The last one, his Sister Marianna, would become the mother of Blessed Joseph Allamano, founder of the two branches of the Consolata Missionaries. He was born on 15 January 1811 in a nineteenth century Piedmont marked by serious social problems but also by so many saints who strove to remedy them. They were linked to one other by a total love for Christ and profound love for the poor: the grace of God knows how to sow and multiply the seeds of holiness.

Having entered the Convitto Ecclesiastico in Turin he remained there for the rest of his life, constantly engaged in the formation of priests and the teaching of moral theology, and exercising his ministry in the confessional and on behalf of the those least considered with a special regard for prisoners and those condemned to death.

From the very beginning he helped Don Bosco materially and spiritually: he was his spiritual director between 1841 and 1860, supporting and defending him with his moral authority. He died at 49 on 23 June 1860. In the funeral oration Don Bosco spoke of him as a model of priestly life, teacher of the clergy, sought-after guide, consoler of the afflicted, comforter of the dying, a friend to all.

This anniversary is particularly significant for all the Salesian Family in this year dedicated to the fostering and accompaniment of vocations, giving a special place to spiritual direction. Last year, celebrating the year of the priest, Pope Benedict XVI in his weekly catechesis on 30 June, spoke in this way about the relationship of spiritual guide between Don Cafasso and Don Bosco: “Among them as I have said emerges St John Bosco who had him as his spiritual director for a good 25 years, from 1835 to 1860: first as a seminarian, then as a priest and lastly as a Founder”.

“In all the fundamental decisions of his life St John Bosco had St Joseph Cafasso to advise him, but in a very specific way: Cafasso never sought to form Don Bosco as a disciple "in his own image and likeness", and Don Bosco did not copy Cafasso; he imitated Cafasso`s human and priestly virtues, certainly and described him as "a model of priestly life" but according to his own personal disposition and his own specific vocation; a sign of the wisdom of the spiritual teacher and of the intelligence of the disciple: the former did not impose himself on the latter but respected his personality and helped him to interpret God`s will for him.”

“Dear friends, this is a valuable lesson for all who are involved in the formation and education of the young generations and also a strong reminder of how important it is to have a spiritual guide in one`s life, who helps one to understand what God expects of each of us”.
Posted by Padre Steve at 5:00 AM