The Saint Who Punched a Heretic 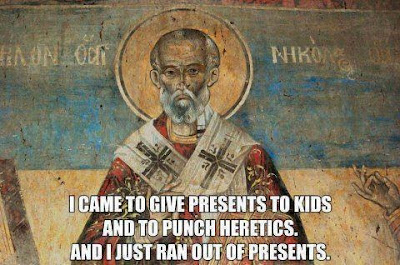 The following comes from Brandon Vogt:

Today marks the feast of St. Nicholas, a saint remembered by most for his association with Santa Claus, some for his commendable charity, but a small number for his famous punch against a third-century heretic.
As the story goes, during the First Ecumenical Council of Nicea (AD 325) there was a big argument over the divinity of Christ. Arius, a heretical bishop, believed that Christ was not divine, but rather just a creature. The Council challenged him to defend his claims in front of his brother bishops, including jolly old St. Nicholas.
St. Nicholas tried to listen patiently but he considered Arius’ proposal so radical, so heretical, that he could no longer contain himself. In the middle of the speech, he rose with a scowl, charged toward Arius, and punched him right in the face.
The noted Punch is memorialized in many icons and works of art, including this piece:
Unfortunately, the Punch got St. Nichols into serious trouble. The Emperor Constantine was present at the Council, and he was so alarmed by St. Nicholas’ act of violence that he and the other bishops stripped Nicholas of his office and confiscated his two episcopal markers: his personal copy of the Gospels and his pallium, the vestment worn by all bishops in the East.
But the story didn’t stop there. According to tradition:

“After Nicholas was deposed, the Lord Jesus Christ and the Blessed Virgin Mary visited Nicholas who was being held in a prison cell for his fist-fight with the heretic.

Our Lord Jesus Christ asked Saint Nicholas, “Why are you here?” Nicholas responded, “Because I love you, my Lord and my God.”

When the Emperor Constantine heard of this miracle, he immediately ordered that Nicholas be reinstated as a bishop in good standing for the Council of Nicea. Today we recite the Nicene Creed every Sunday so we know how the controversy played out. The bishops at Nicea sided with Saint Nicholas and Saint Athanasius and they condemned Arius as a heretic.

To this very day, we still recite in the Creed that Christ is “God from God, Light from Light, True God from True God, begotten not made, consubstantial with the Father.”” 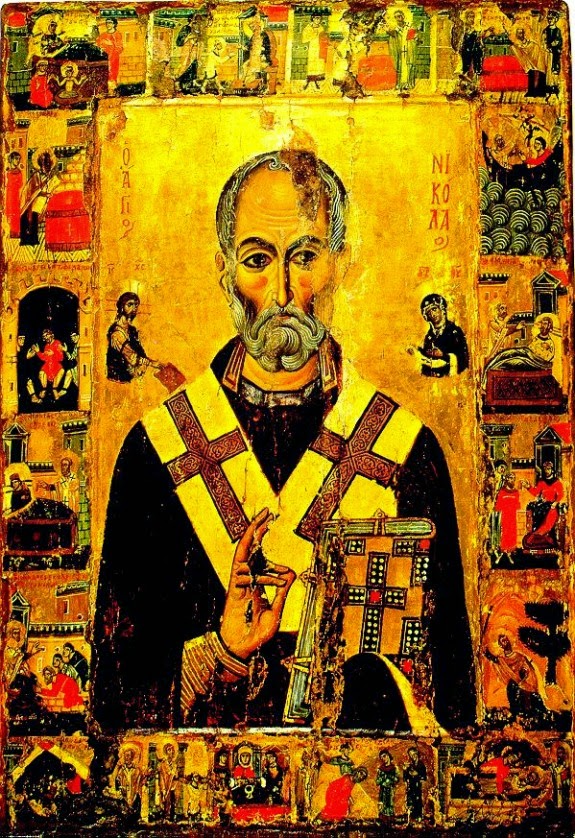