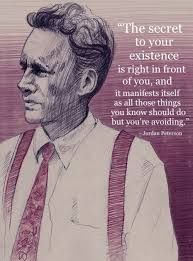 The following comes from Peggy Noonan at the Wall Street Journal:


When I speak with young people beginning their careers I often tell them that in spite of the apparent formidableness of the adults around them—their mastery of office systems, their professional accomplishments, their sheer ability to last—almost everyone begins every day just trying to keep up their morale. Everyone’s trying to be hopeful about themselves and the world. People are more confused, even defeated by life, than they let on; many people—most—have times when they feel they’ve lost the plot, the thread. So go forward with appropriate compassion.
This flashed through my mind when I saw the interview this week between British television journalist Cathy Newman and clinical psychologist and social philosopher Jordan Peterson. It burned through the internet, in part because she was remarkably hostile and badgering: “What gives you the right to say that?” “You’re making vast generalizations.” He seemed mildly taken aback, then rallied and wouldn’t be pushed around. It was also interesting because she, the fiery, flame-haired aggressor, was so boring—her thinking reflected all the predictable, force-fed assumptions—while he, saying nothing revolutionary or even particularly fiery, was so interesting. When it was over, you wanted to hear more from him and less from her.
I wondered when I first read the headlines: What could a grown-up, seemingly stable professor (former associate professor of psychology at Harvard, full professor for 20 years at the University of Toronto) stand for that would make a journalist want to annihilate him on live TV—or, failing that, to diminish him or make him into a figure of fun?
He must have defied some orthodoxy. He must think the wrong things. He must be a heretic. Heretics must be burned.
I had not known of his work. The interview was to promote his second book, “12 Rules for Life: An Antidote to Chaos.” Mr. Peterson is called “controversial” because he has been critical, as an academic, of various forms of the rising authoritarianism of the moment—from identity politics to cultural appropriation to white privilege and postmodern feminism. He has refused to address or refer to transgendered people by the pronouns “zhe” and “zher.” He has opposed governmental edicts in his native Canada that aim, perhaps honestly, at inclusion, but in practice limit views, thoughts and speech.
Read the rest here.