Unwrap the Gift of Silence 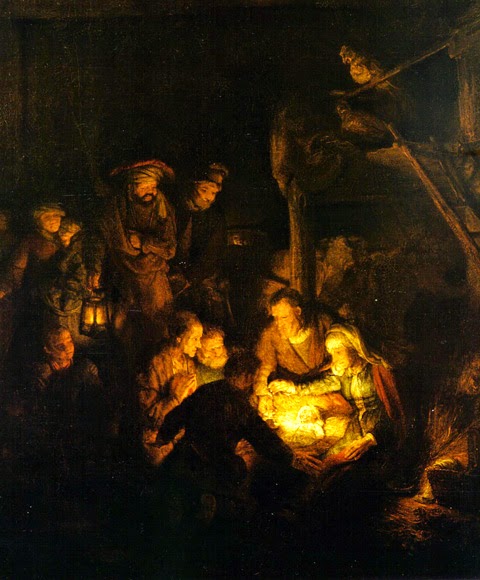 The following comes from The Anchoress:

The silence of which we sing so wistfully at Midnight Mass, is at an all-time premium at Christmas; it is so difficult to find a silent night, let alone sit within one and become immersed in it, that the possibility of a seasonal soothing of the heart—a quieting of the grief of the world—seems the stuff of illusion and myth.

Christmas has, in too many ways, become the equivalent of an overdone theme-park vacation. By its end, one is knock-kneed with exhaustion and desperately in need of a genuine opportunity to rest.

A Christmas snow, like the one we’ve just had, does wonders to cull the silence. A few inches of white powder brings an unusual and welcome softening of sound—in cities, the hum of traffic is muffled; in the suburbs even the broom of the ubiquitous snowblower is reduced to a faint and unobtrusive whir, one that remains mostly beneath the surface of one’s awareness.

In such a silence, if you have turned off the television and tempted your child away from his games with a good book, you can hear other things: the chatter and call of cardinals who have found the birdseed; the crack of a log in the fire; hot coffee being poured into a cup; the ticking of your last non-digital clock; the rhythmic breathing of tired child (or parent) who has dozed while reading; the soft thud of a book sliding to the floor.

You can hear life, forced into a slow-down; life less deliberate; life lived as it was for centuries, before the busy inventiveness of the last five decades: life acquiescent to uncontrollable nature, and hunkered-down.

We have allowed silence to become a gift forgotten, one we only consent to unwrap when all of our alternative bows and strings have been unraveled, and our diversions have been utterly played out. Our inability to be silent puts our minds and our souls at a disadvantage, because it robs us of the ability to wonder, and if we are not wondering at the impossible perfection of the world in its creation—if we are not wondering at spinning atoms and Incarnations—then we are lost to humility, and to experiencing gratitude.

And, without gratitude, we cannot develop a reasoned capacity for joy.

One of the most attractive things about G.K. Chesterton was the unending sense of surprised delight he had for all creation, the world and everything in it. He found newspaper ink to be as wonderful as beach glass, which—it went without saying—was as marvelous to him as any good cigar. He was as awe-struck and grateful for the world as a teenager in love, and he wondered about the unconditional gift of days that God had given him. He asked with astonishment, “Why am I allowed two?”—a great question in an age where we expect unending, medically-engineered days.

Chesterton was joyful, because he was grateful; he was grateful because even within his busy life, he was allowed the leisure of silence, with which gift, he was able to wonder. And, as St. Gregory of Nyssa is credited with saying, “only wonder leads to knowing.”

If we cannot wonder, how can we presume to know the Timeless and Eternal God? Without wonder, how may we know ourselves? How do we remember that time is a construct to which we must not become enslaved?

By what means shall we know that, when we are so deeply immersed in the seasonal pronouncements of Madison Avenue, where Christmas begins (at the latest) in early November and ends on December 26, whence commences Valentine’s Day? In all times and seasons the media-message is a weirdly incongruous (and John Lennonesque) amalgam of “be here now” and “serve yourself.”