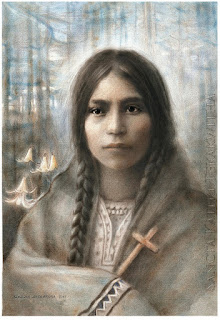 The following comes from Franciscan Media:


The blood of martyrs is the seed of saints. Nine years after the Jesuits Isaac Jogues and Jean de Lelande were tomahawked by Iroquois warriors, a baby girl was born near the place of their martyrdom, Auriesville, New York.
Her mother was a Christian Algonquin, taken captive by the Iroquois and given as wife to the chief of the Mohawk clan, the boldest and fiercest of the Five Nations. When she was four, Tekakwitha lost her parents and little brother in a smallpox epidemic that left her disfigured and half blind. She was adopted by an uncle, who succeeded her father as chief. He hated the coming of the Blackrobes—Jesuit missionaries—but could do nothing to them because a peace treaty with the French required their presence in villages with Christian captives. She was moved by the words of three Blackrobes who lodged with her uncle, but fear of him kept her from seeking instruction. Tekakwitha refused to marry a Mohawk brave, and at 19 finally got the courage to take the step of converting. She was baptized with the name Kateri–Catherine–on Easter Sunday.
Read more here.